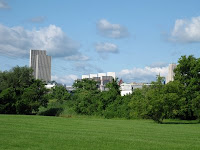 Canajoharie to Albany (with an unremarkable stop in Scotia). There were two notable events in the last two days which if we ever had to do it again, we would do like Mark and ride it all in one day. The riding was good. The canalpath here is mostly paved and while the Enemy's tires make a distinct whine on pavement, still the going was better than through stonedust.

Notable event 1: Almost daily S. and I would notice a local tv station news crew onsite shooting footage of the ride. Usually they chose some cute little family to interview, or the piece would be on how far away the riders came from, or the bikes, etc. On the last day, as we were brushing our teeth at the communal, outdoor 8 sink washstand a man from channel 8 sets up his camera next to us and begins filming. As my kids will tell you I'm not one for PDoTB (Public Displays of Tooth Brushing) so when he did ask if he could film us I asked if he could wait until I was putting in my contacts. He asked some of the others how they felt about "roughing it on the road" and if he could also film them at their morning routine. One woman replied that "she was almost done here but he "was welcome to follow her to the port - a - potty. "

Notable event 2: We arrived at the last Tent City early in the afternoon. Having perfected the baggage and beer retrieval and tent site location and set up routine we were soon sitting in our 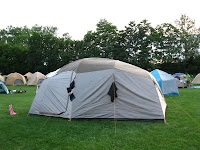 chairs watching other riders straggle in and repeat the process. A process that had also become fairly routine and efficient for everyone else. But today a new group had joined the tour. Over the next 45 minutes we watched as first 2, then 5, then 8 people attempted to set up this new tent. Even with reading the directions it took 4 attempts and 35 minutes. Admittedly it was a big tent, at least for 4 people, and one that was even equipped with a screened off 'porch'. For its large size and grey color I nicknamed it The Pachyderm. After the excitement died down I wandered over to take a look, especially at the brand. EMS. According to their website the EMS Pallas is a 6 person tent, and according to the reviews - 45 minutes may be speed record. But, in all honesty, every reviewer did like the tent and but none reviewed its entertainment value to which I give 4 stars.

As for the ride itself, to a first time bike tourist, and one that doesn't ride too often, or a family that wants to ride together, I'd recommend it. To people who want to put some miles under their legs, see new places, and eat good food, I say keep looking. Because this trip taught me that that is what I want from a tour. Something where someone has done the legwork, so I can work my legs - and keep the adventures coming.
Posted by Kelly at 10:30 AM