Back in the Mountains - Bend, Oregon 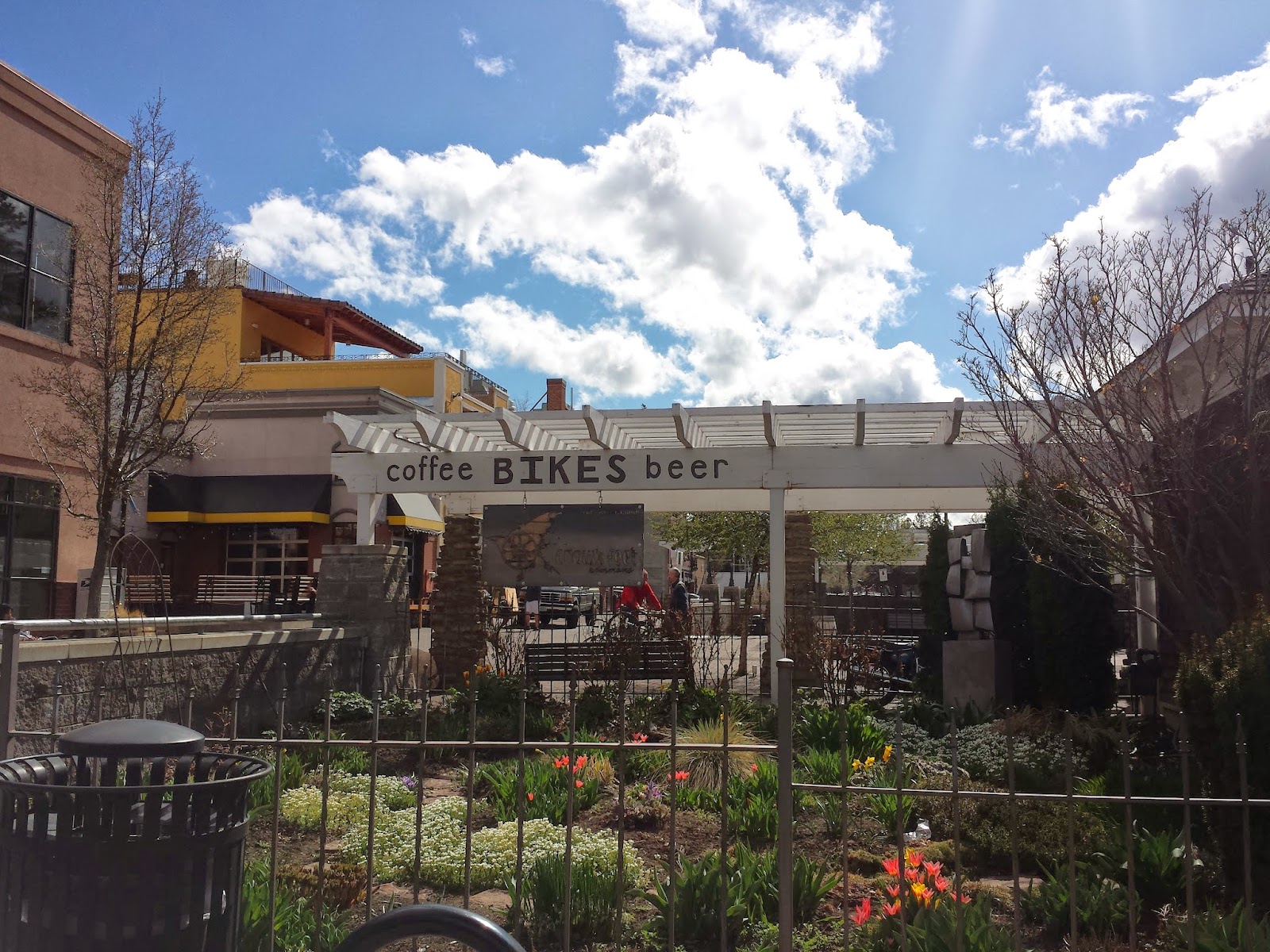 Coffee Bikes Beer
Yes, I could live here
In a little town called Bend
Where the volcanic peaks of the Cascades meet the high plains

Where a 900 ft cinder cone
Rises up through the center of town
And locals and visitors circumambulate
To see for  miles around.

Driving south from Mt Hood we crossed over to the back side of the Cascades rain shadow and entered the Oregon High Desert. Where only an hour before we had been driving through dense forests dripping with moss, we were now driving across a treeless plain. Where we had only been able to catch an occasional glimpse of a mountain, we could now see the whole line of them running from North to South.

After about an hour, we then arrived at our destination, the little town of Bend. If you ever go to Bend be sure your first stop is at the Information Office. We arrived at 4:50, ten minutes before closing. Expecting to be quickly shown a map or two and pushed out the door, we were instead greeted by the friendliest, most helpful, most Bend-loving person imaginable. She not only gave us a personally annotated map of all the spots to see in Bend, she also gave us the Ale Trail map (11 breweries 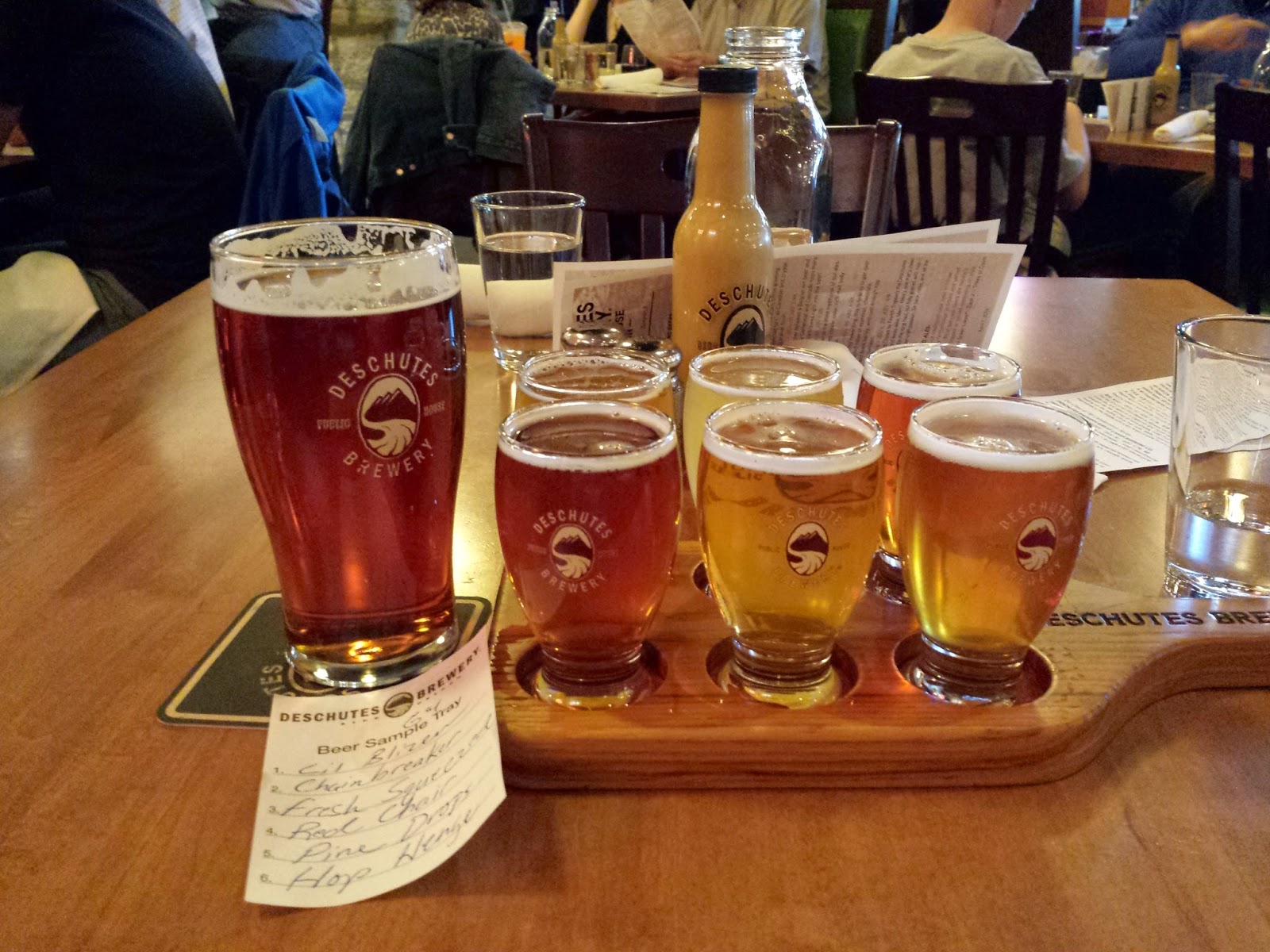 within walking distance! 18 total in town), pointed out all the local hiking spots (Pilot Butte, a cinder cone in the middle of town).

Leaving the Information Office at 5:30, we headed off on a quick walk through town and down to the park along the Deschutes River. And that's when we saw the sign, "Coffee Bikes Beer"and I knew I was going to really like this town. We continued our stroll, continued admiring the coffee shops, and the variety and quantity of bikes.

We also began debating our beer options. Neither of us felt up for visiting 11 breweries, even if they were in walking distance. We were more in the mood for visiting one, having a good dinner, and sampling just a few of the local brew. This being our first trip to Bend, we decided that the only real option was the Deschutes Brewery. After all, could you really go to Bend without going there?

After enjoying a flight entirely of IPAs and an Elk burger, we agreed we'd made an excellent choice, and then headed to our B and B for a nice quiet night in a room just outside town and along the river. 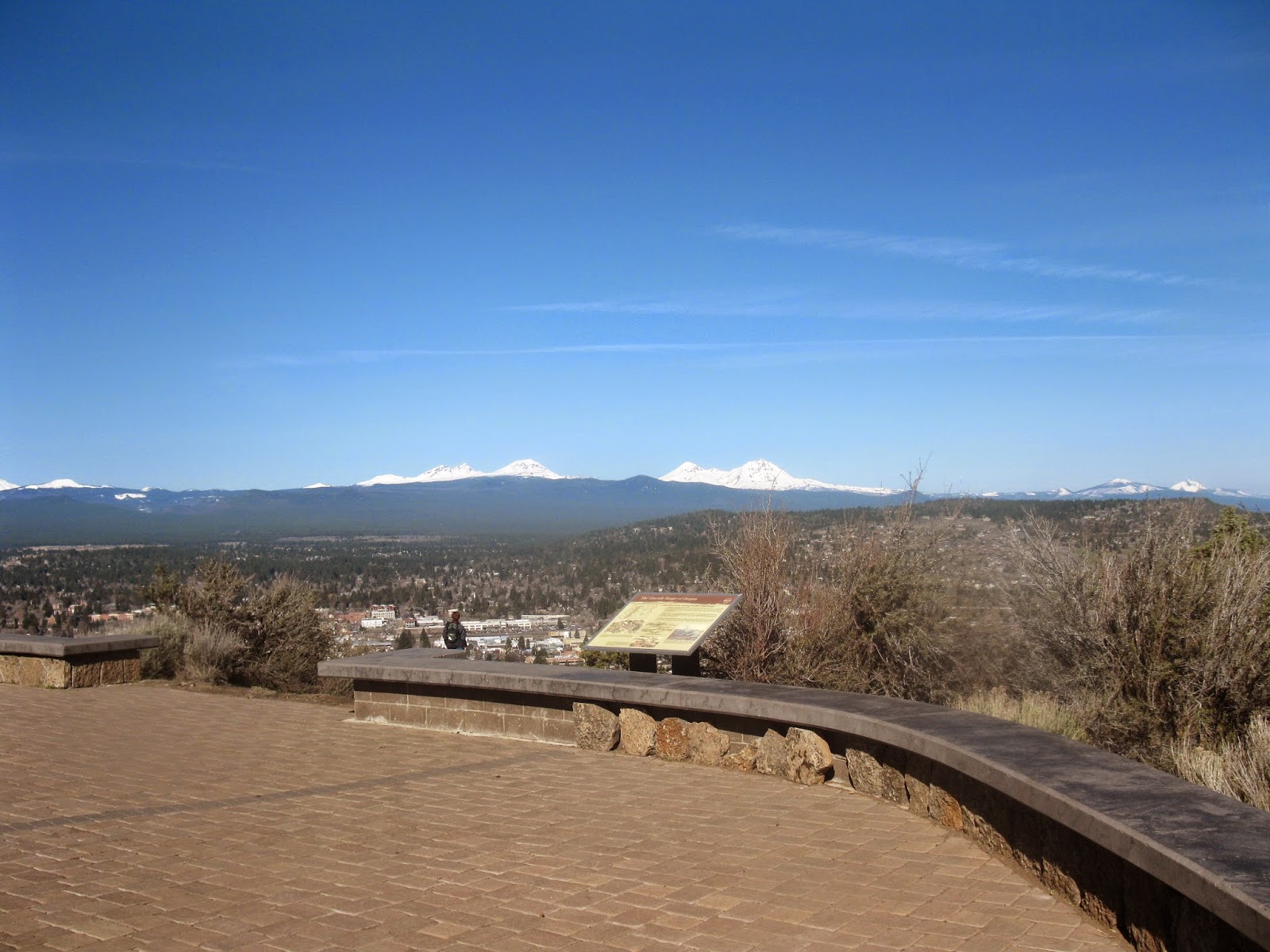 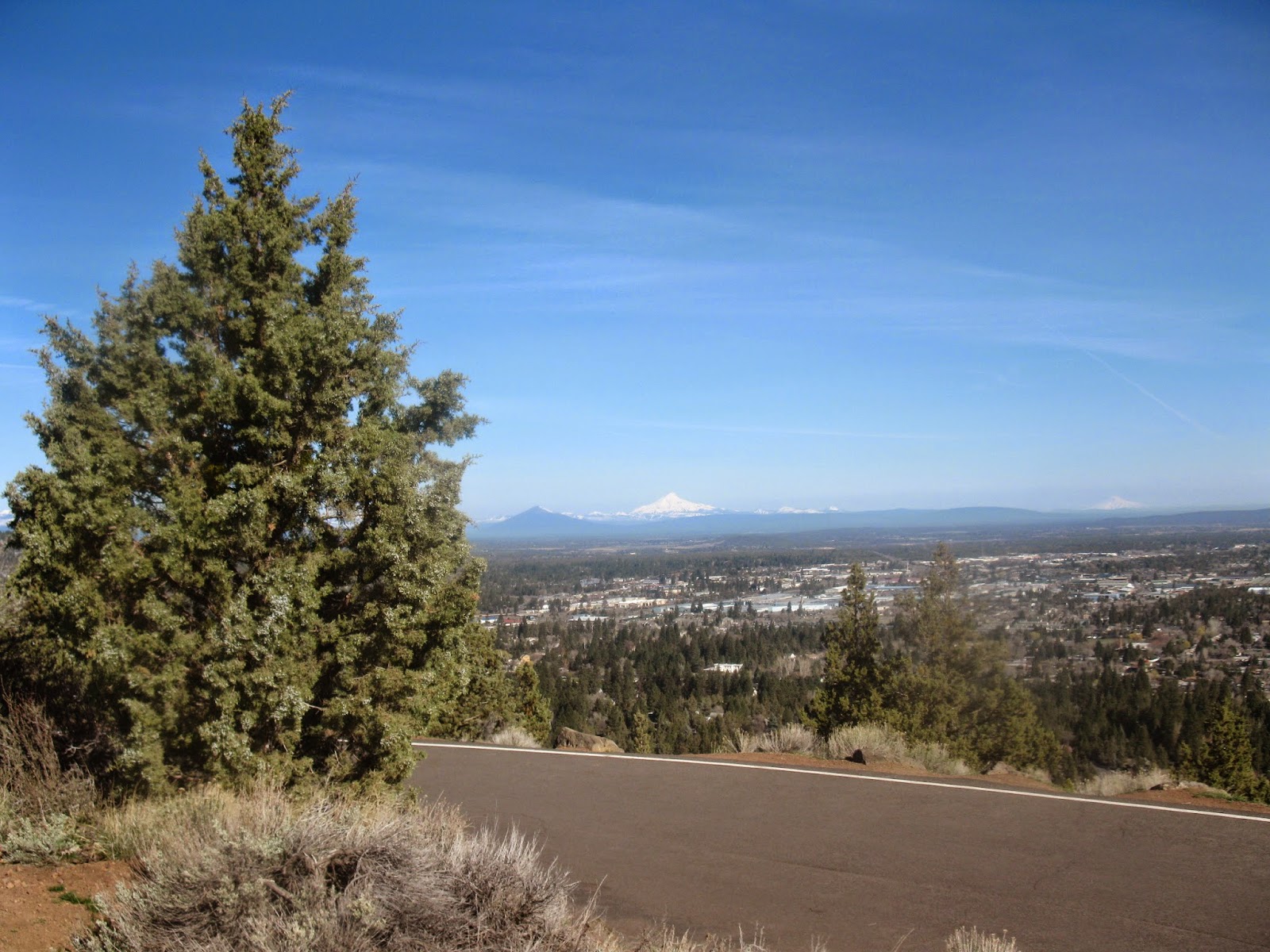 The next morning, before heading South to Ashland we drove back to town and circumambulated the 900 ft cinder cone both so we could get in a hike before the long drive and because the information lady had told us there was a plaque on the summit that described the mountains. Looking to the far North we could just make out Mt Hood. Due West was Mount Bachelor, and to the South Mt Thielsen rose all jagged and beckoning. We'd be driving past it in less than 3 hours.

Back in the Mountains - Mt Hood 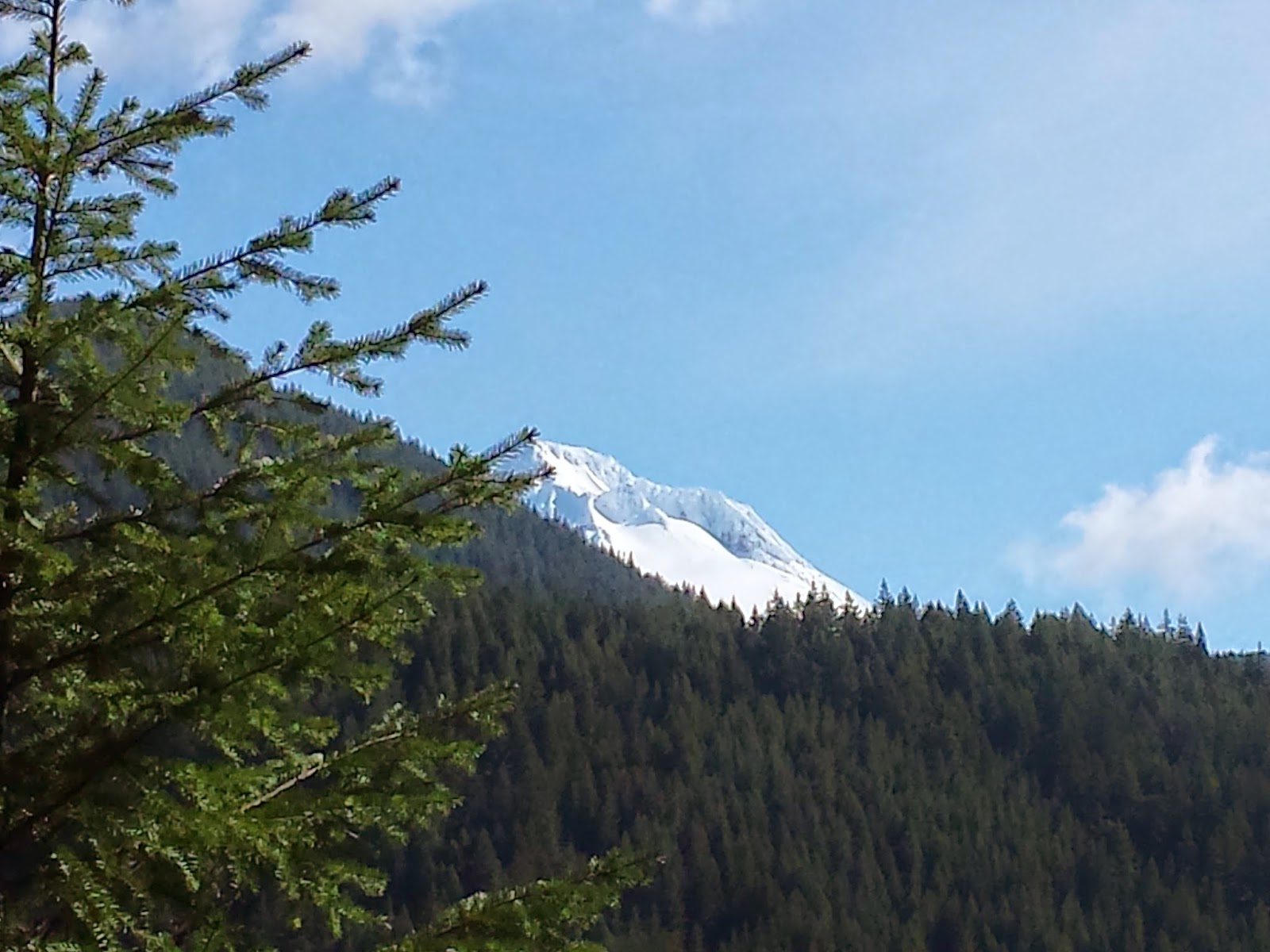 The first thing I did after waking up in the Portland airport hotel was open the window blinds and find Mt Hood. It took only a few seconds even though it was over fifty miles south and partially obscured by clouds. Even from within the hermetically sealed (even though the window did open, a rarity in hotels, the room was across the street from the airport runway, we kept it closed.) hotel room I could feel the mountain.

The second thing we did (after getting S.D. up and moving and getting breakfast) was rent a car and start driving south on RT 26, straight to Mt Hood.

The third thing we did, only about an hour later, was hike  up the Flag Mountain Trail to an overlook with great views of Mt Hood. (Still over 15 miles away). By then the clouds had all cleared and sun's reflection off the snow was almost blinding. But standing in the cool, dripping wet of a Pacific rain forest mountain top you were still drawn to the cold, commanding presence of that Mountain. 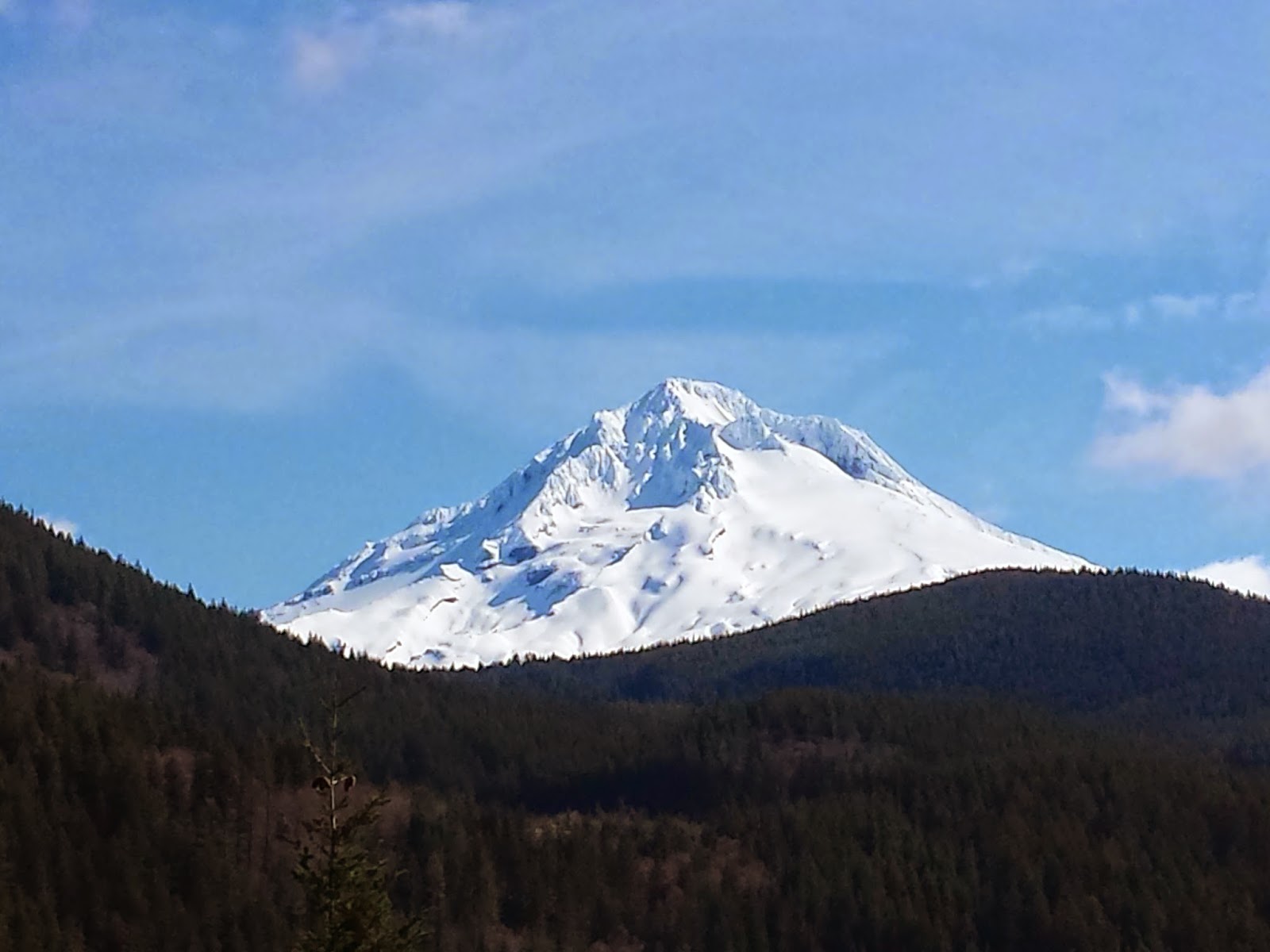 Back home in the North East, the Mountains are somewhere you go. You go to either Northern New Hampshire, Vermont or Maine. And when you're there, it's all mountains. In the West however, the mountains aren't so much a somewhere, as a something. They are something that is always present. They may be one hundred miles off, or you may be on the flank of one but there is always a mountain. Part of the difference has to do with the size of the Western vs the Eastern mountains. If Mt. Washington was 11,240 ft high like Mt. Hood, instead of 6,288, you just might be able to see it from Boston. Part of it has to do with the history of the Western Mountains. Most of them are relatively recent volcanoes rising up from the edge of a fault line. Generally they stand pretty much alone and above the mountains around them, presiding over plains on at least one side if not two or three, rather than reaching up from within crowds of other mountains. 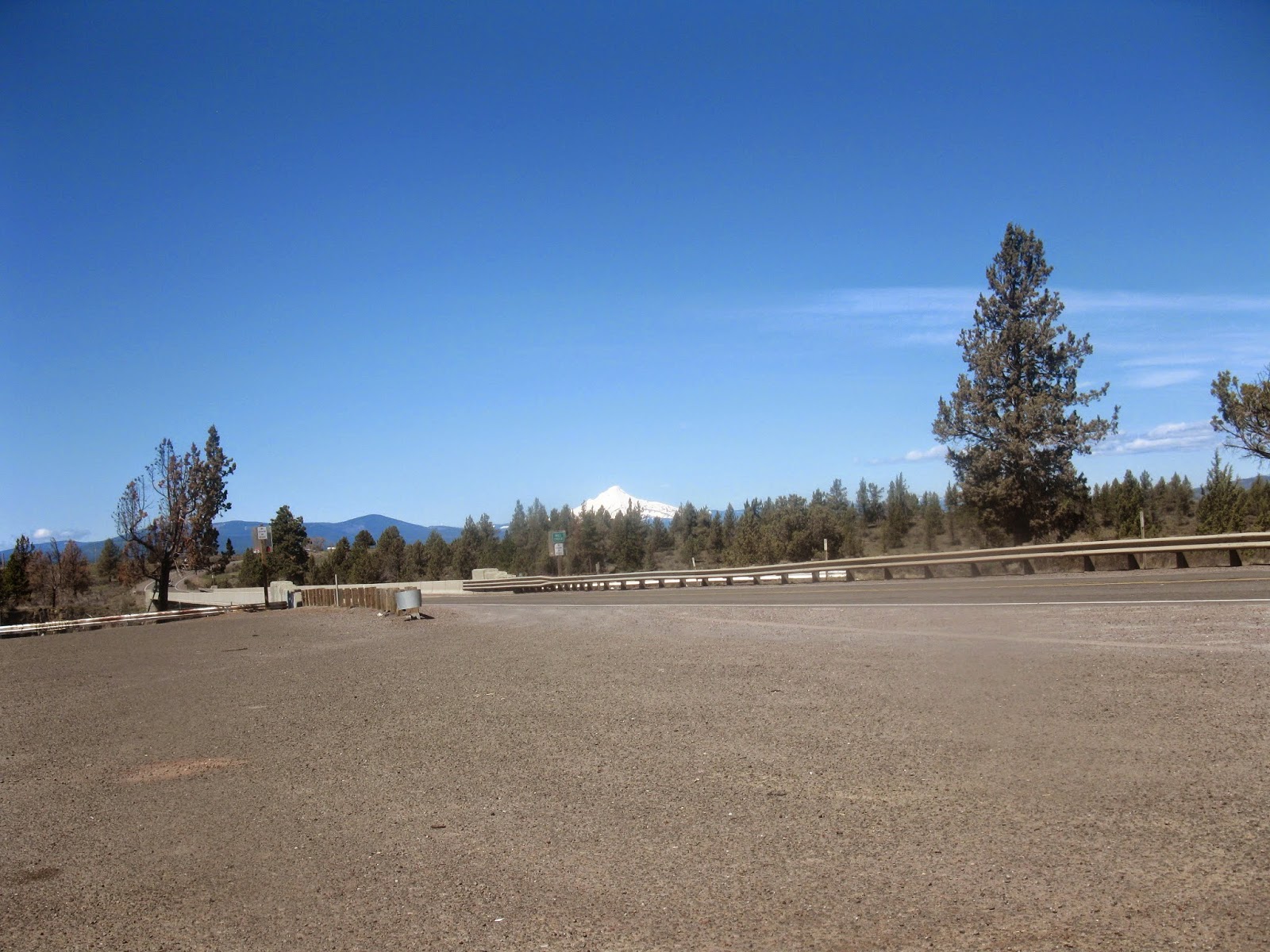 And the effect of that is that is that often, wherever you are in Oregon, the mountains are there too. You might be in the city, on the ridge of a small rain forest peak, or down in the high mountain desert, but wherever you are, you can see, and feel, something big nearby, something that is a mountain.
Posted by Kelly at 9:05 AM No comments:


Every year on the last day of elementary school the principal would gather all the kids at the front of the school and ring a giant-independence-hall type bell to signal the start of summer vacation. The ringing of that bell would release us from the Monday to Friday schedule. Screaming at the top of our lungs we’d run off down the hill to summer.

Last Tuesday I closed the office door behind me and felt the same awesome release. While I didn’t start screaming and run through the library wildly waving my arms in the air...I sure felt like it. I was going on vacation.  It was going to be warm and sunny and scheduleless.

The next morning S.D. and I took a taxi to the train, to the subway, to the bus, to the plane.  6 hours later I still felt that summer-vacation style release. It had been over a year since we'd gone on a serious vacation and now I was in Oregon. The Cascade range from Mt Hood to Mt Shasta was ours to explore for the next week, and we were going to do it in style!
Posted by Kelly at 7:23 PM No comments: