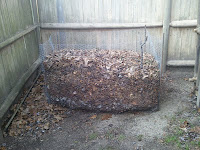 What constitutes an adventure? SD and I disagree.  He insists that renovating this new house qualifies (he also insisted in adding a few comments - they are in green). I insists life is an adventure, lets enjoy it and take advantage of it.  (although most time he says it's "something to get through". I contend that having done more than 8 houses between the two of us, it doesn't.  What a stick in the mud.

That no matter what the house looked like when we saw it that rainy day in August, we both knew what it could be and that getting it from there to here and forward was something we would do, it might even be fun, but its something that really didn't qualify as an adventure. I insist it qualifies, (it is if you believe life is an adventure, loosen up!), because it's the first one we've done together, and because we're both a good 15 years older than the last time we did it.

C. K Chesterton says "An adventure is only an inconvenience rightly considered."(That a recipe for considering all life's trials and tribulations an adventure, it's all in your attitude!!)


He feels that his adventure lies in doing the renovation with someone like Me. You are so lucky, as am I, how much better than that can it get? Life sucks, making an adventure out of it makes it better!!!!!

This morning I walked out to the compost bin we built two weeks ago and filled up last weekend. And it was smoking!! Actually smoking. That baby was burning! And not just in the middle. As i turned the outside leaves into the center more smoke rose. An upturned clump of grapes was almost shooting flames.  I have built many a compost pile in my time. Most molded into usability. Only one, and that one was half horse manure, ever burned. But now, with the help of the lovely SD, things are smoking (so life isn't an adventure but the compost pile gets you excited?).

This house thing with SD just may turn into an Adventure after all.
Posted by Kelly at 7:36 PM 1 comment: 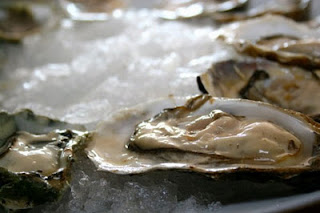 Oyster farming combines two of my favorite things, farming and being on the water. Oh, and Oysters!  Shucked: Life on a New England Oyster Farmis an ode to all three. Written by Erin Murray, a woman who spent one and half years farming oysters at the Island Creek Oyster Farm in Duxbury, Mass does a great job of describing the the highs and lows of the life. The mud, the cold, the phyiscal demands, the crew comraderie, the taste of freshly picked oyster, and the pride of growing good, sustainable food.

I'm a big fan of aquaculture, for a number of reasons
, and it really bugs me that most people equate aquaculture with agribusiness and all it's pollutants, and cheep labor practices, when aquaculture (at least in the US) is really about sustainable, local farming. I love the role oysters play in the food chain, in the filter chain, and in the local economy - and Shucked does a good job of explaining those relationships. 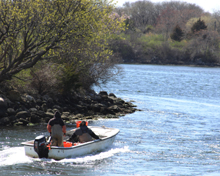 Murphy also briefly talks about aquaculture as a means of sustaining the New England Fisherman tradition as most of the Oyster farmers that sell to Island Creek are either ex or part-time fishermen/lobstermen. Which is key in my mind. Why let the big fishing fleets of Stonington, New Bedford, and Gloucester die off as the wild fish stock is fished out, why not set those seafaring, ocean-wise folks to growing? (aside from their major  aversion to transition from hunters to farmers, that is)

Oh, and that brings up another point. The book includes a number of great oyster recipes, but really, seriously folks, isn't the best way to have oysters raw, slurped right out of the half-shell?
Posted by Kelly at 7:27 AM No comments:

It's amazing how fast you can kayak down river, with the outgoing tide,and a west wind at your back. But the real question is how long it takes to get back to the launch site? And will you still be having fun when you get there? 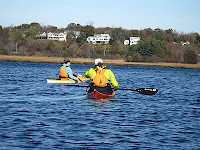 We put in at the East Street boat launch in Ipswich for a paddle east to the sea. It was a beautiful fall day. High tide had just passed, so both the river and the tide were with us. And have I mentioned that the wind was too? From the boat launch to the sea, the river runs approx 2 miles through an estuary/bay, but the channel is well defined. It also meanders with several bends and reaches. By the time we came to Plum Island Sound the flow rate was amazingly strong and we pulled onto the beach watching as a lone kayaker fought their way through the rip and into the river, and contemplated the trip back.

After a quick Shot Bloks 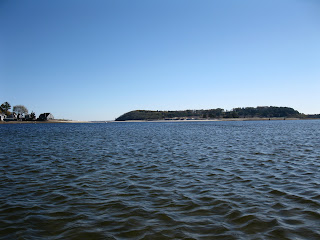 Although I wasn't walking the experience reminded me of walking up the Virgin River in Zion National Park. "As the water rushes down you have to figure out where the water is running deepest and fastest." and get to the other side. Figuring out where and when to cross is almost as challenging (in a fun way) as the paddling.

Turns out it takes approx 3x the times and effort to go back but the effort in no way lessens the fun. The paddle out was just as fun as the back, with the added challenge. The day just as beautiful. the company just as good.
Posted by Kelly at 3:19 PM No comments:

A Tale of Two Kayaks 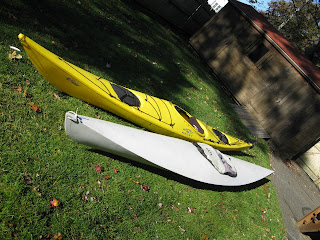 They were the best of kayaks, they were, well, both the best of kayaks, but for different reasons. Just as Eliza was settling into her new home, a old new comer showed up. Build by SD back in 1992, stored and loved by good friends, and known by those who've kayaked her as the Grey Ghost, she weighs in at 25 lbs with a length of 14ft, and is of stitch and glue construction. Eliza is 14. 5 ft., weighs 49 lbs and is of rotomolded plastic.

SD's pine/Inuit paddle is noticeably both heavier and longer that any paddle I've ever used. It also has a much narrower blade. Aside from the weight, I really liked it.. Just  very little effort had either boat moving out, and building momentum with ease. Turning was a bit more complicated with the longer, thinner paddle but some of that may have been from lack of experience.

When I switched to the Bending Branches paddle, the lightness was welcome, but the shortness of the stroke suddenly felt unnatural and stunted. After using both paddles I decided the ideal one would be light but long. At least 20 cm longer than what i had, and with a narrower blade. (Hint: Werner Athena  )

Kayak comparison was not so easy, not so conclusive. While both are roughly the same length, and width, their weight, construction materials and hull shapes are very different, and it comes through in the paddling. SD's kayak was known as the Grey Ghost because of her off white color, but I felt she paddled more like a glass slipper. So light, seemingly delicate, and super responsive. There was no give in her, she moved out, no energy was lost between paddle and boat. She was also very low in the water, and. I'd guess in a heavier swell, she'd skim right through, rather than over, the waves. As it was she easily held a steady course, even downwind.  In the hands of an expert paddler, and with a not-so expert on a very calm sea, I suspect she'd be a dream.

But, I'm no expert paddler and Eliza was more forgiving. Not so responsive, and not so balanced, but more comfortable. She took a little more effort to get under weigh, but she went just fine.

So for now, I guess I stick with Eliza.  I guess, but boy is that little slipper seductive.

What a Difference a Month Makes


Only one month ago we purchased our lovely little clashingly decorated home. After only 30 days of wall-paper stripping, hole puttying, painting, floor sanding, tile cleaning, cabinet scrubbing and a heavy dose of decorating awesomeness we now have the beginnings of a lovely little home. And here's the proof: 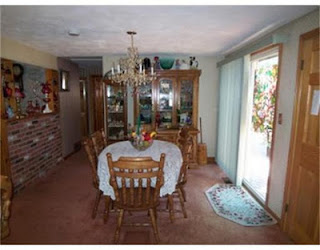 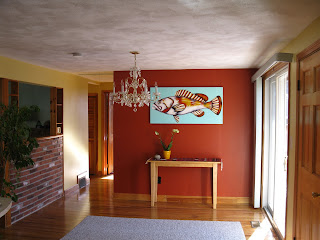 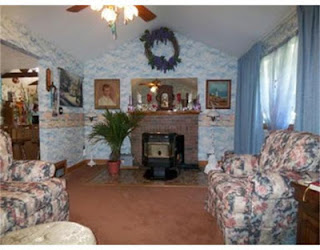 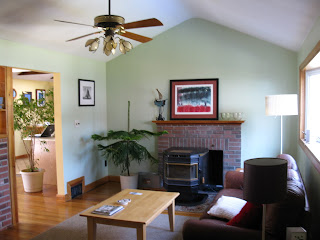 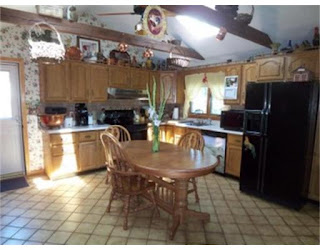 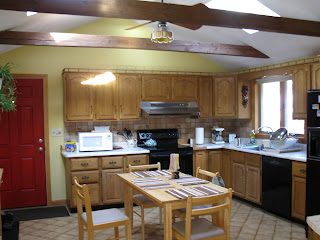 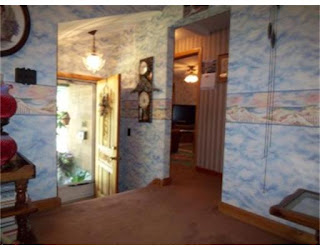 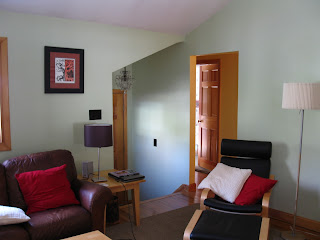 Who are the People in Your Neighborhood? 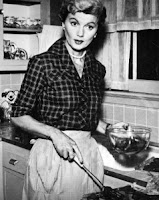 While renovating and moving into a house no longer qualifies as an adventure (been there, done that about 8 times!) people ringing your doorbell (2 tones for the front, 1 for the side) and dropping off welcome-to-the-neighborhood cards, soup, and cupcakes certainly is. As is having the mailman introduce himself as the neighbor who lives in that house "over there, the one with the red garage door." All this is very new, at least for me as an adult. I do believe Noank, the town where I grew up, was much like this but being a kid, I was oblivious to all the adult-doings. Since then I've lived in a number of places and can recall only one time a neighbor offered a welcome gift. Sure, we'd eventually meet and talk, during a snow storm, or on the stairs, while doing yard work, or after our kids starting running together but generally neighbors pretty much stayed inside their physical and social boundaries

This neighborhood is proving very different. I had only just recovered from a real live paper boy sighting (complete with white canvas sack and orange shoulder strap) when a posse of 10-12 year olds rode by on scooters and the neighbor across the street walked up the driveway and introduced himself.

Now the Sesame Street song that is now on continual loop. This is indeed an adventure into a strange, perhaps wonderful, perhaps a bit-too-friendly-for-a-Nutmegger, world. But as SD always says, we'll see. As the years go by in this latest adventure I suspect I'll be able to resist the urge to put on a dress and apron while cooking,and leaning over the fenced to gossip with a neighbor, on the other hand I could ace the lawn and garden competition.
Posted by Kelly at 6:55 AM No comments: