When telling people about our plans to sell everything, buy a van, go to South Dakota to establish residency, then go West to go bike touring and backpacking, the first question they ask is, "Why South Dakota?"

South Dakota, it turns out, is pretty cool. It has the Badlands, the Black Hills, and the Grasslands.  "Rocky Raccoon", and "The Ballad of Hollis Brown" both take place in South Dakota. It was the home and setting for three of Laura Ingalls Wilder's books, and currently the Laura Ingalls Wilder Historic Homestead.  For motorcycle fans there is the Sturgis Motorcyle rally every August. An event that draws over 460,000 attendees, increasing the state population by almost half. Apparently it is also a state that sells itself as being a better place to live than Mars.


But until that campaign catches on, South Dakota is the the 5th least populated, 5th least densely populated state in the union. In 2013 the population of South Dakota totaled 853,175 and was composed of 323,136 households, each with 2.45 people per household.

While all those  reasons are great. The real reason we want to become two of the 61516 "residents" without a household is because South Dakota is the perfect place to 'live' without having to live there. The state laws, taxes, vehicle registration and licensing requirements make it the perfect home for nomads.

With the house under contract, the car replaced by a van, and less that 7 weeks until we leave, it's time to start getting rid anything that won't fit in the van. And while we never accumulated much in the first place, letting go of what we do have is a lot more difficult that I'd expected. And it's difficult for both emotional and logistical reasons.

1. It's worth less. A lot less than we paid for it, and even less than that. And while rationally, that's  understandable, it's still hard to accept. For instance, there's my Big Agnes LuLu down sleeping bag and pad. New, they sells for $220. In like new condition I haven't even been able to sell them for $60.00. Someone offered $20 for the pad, and then asked me to include shipping. (The exception to this rule are the junker cars and trucks that S.D. buys. He's bought and sold a car a year for the last 6 years and comes out ahead every time.) 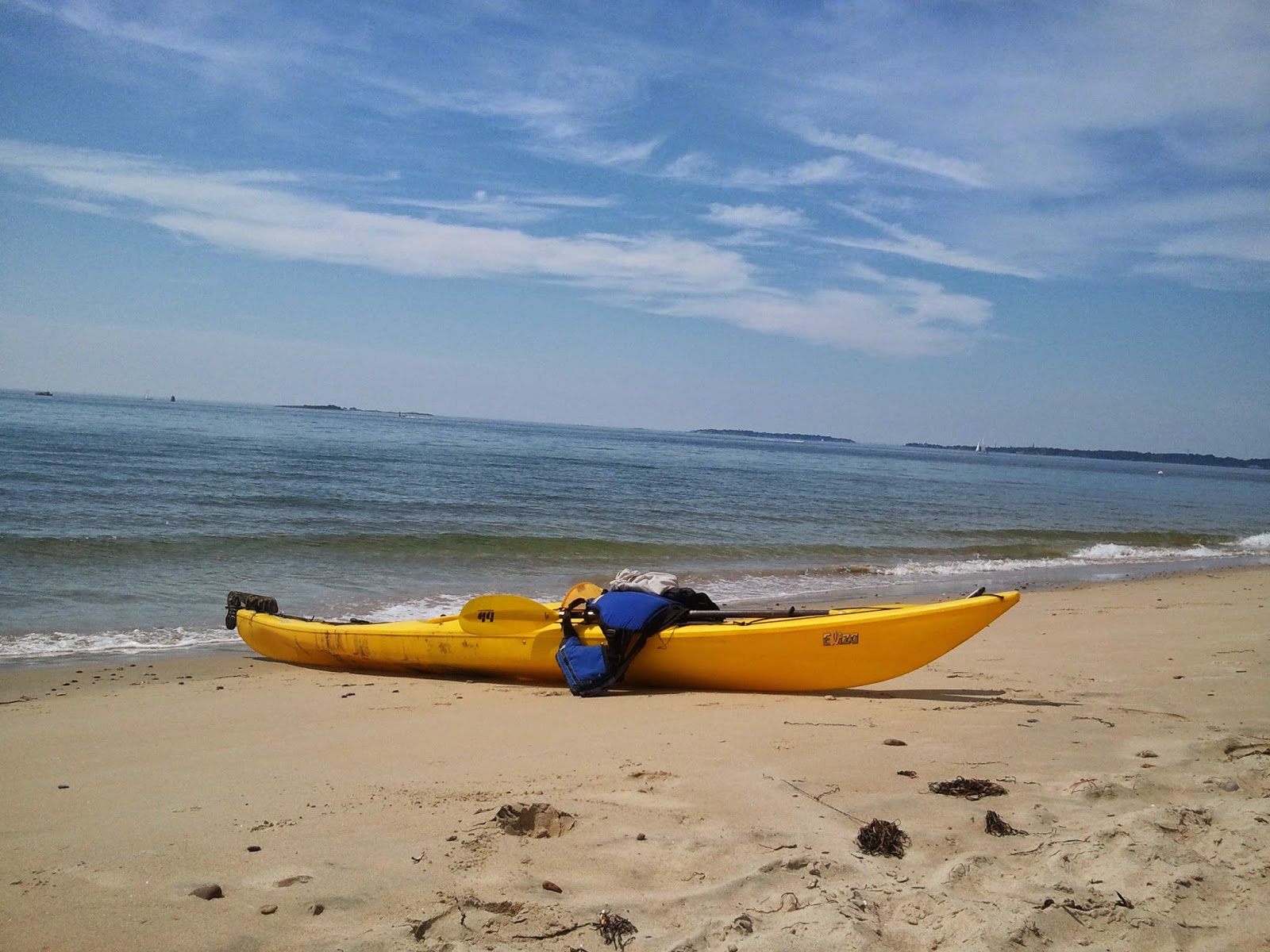 2. Some of the stuff defines you, or rather it's the owning of the stuff that defines you. All due respect to Henry David Thoreau, but sometimes this feels like a good thing. My kayak. Eliza, falls into this category. I love kayaking. Being right on the water. Exploring the tides, riding the waves, paddling along. I am therefore, someone who owns a kayak. And while having the kayak on top of the van, bicycles hanging off the back would look cool, the reality is there is not much opportunity for kayaking on the PCT, nor does trailering a kayak on a bike tour make much sense. And so the kayak, the paddles, the life vest, all must go.  Went yesterday actually.  This morning I'm still feeling the sad emptiness of being a kayak-less, kayaker.

3. Varieties of stuff give you options. Shoes, for instance.  Having lots of different kinds of shoes gives you infinite options. For hiking alone there are five options: regular trail shoes, waterproof, lightweight trail-running, leather hi-top boots and insulated winter boots  Somehow I have to whittle the collection down to three?  and I have two in each of those categories. Then there are dress shoes. I can only keep one whereas now, I have no clue what the count is, the options currently are endless. What one shoe can fill them all? 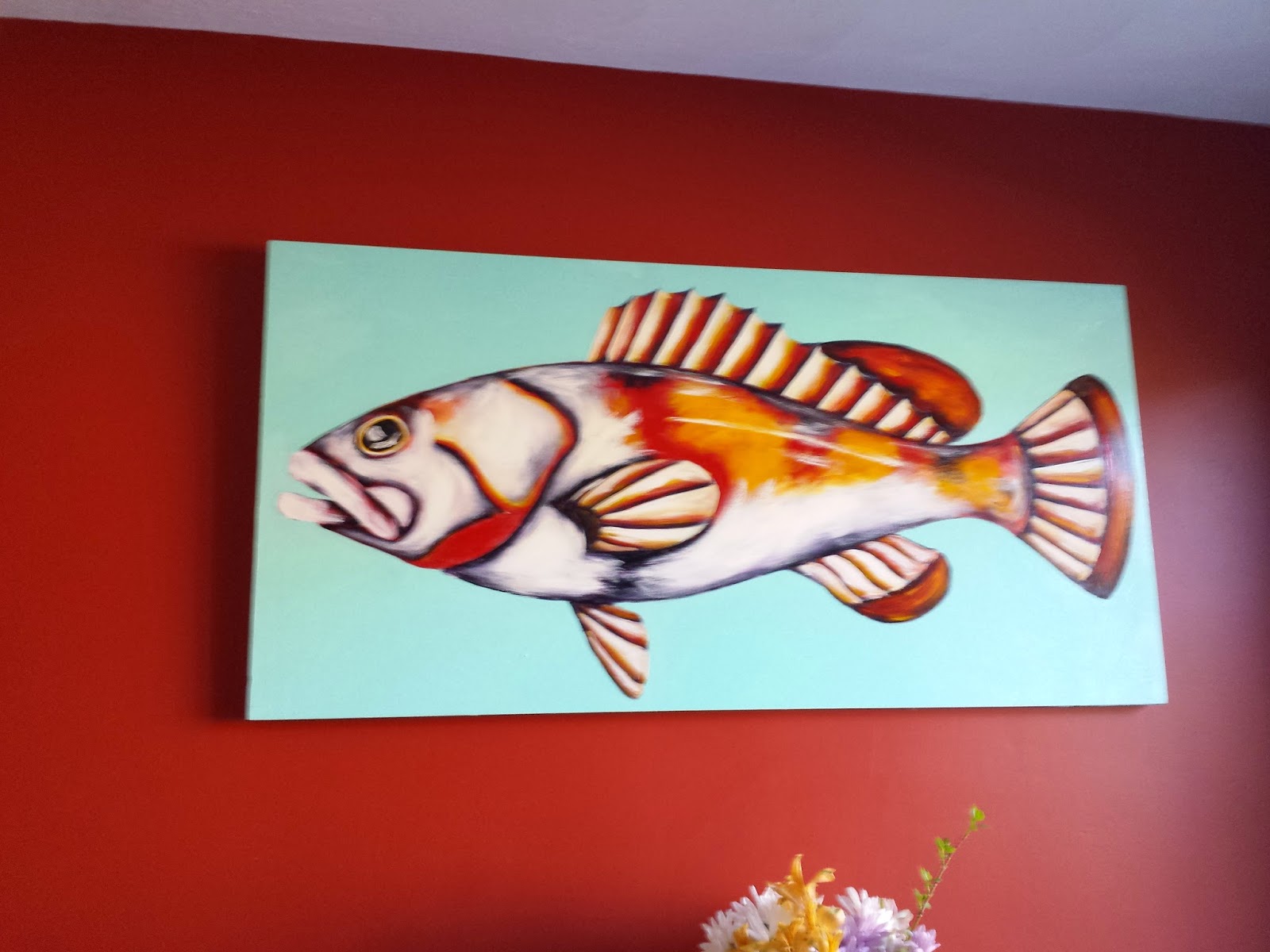 4. Some stuff represents stories, or places, or people. Stuff makes experience concrete. Will giving up the stuff lighten the attachment?  Originally I insisted on taking "Herman" our mythical fish painting. Not only is it a cool painting it's the first, and only, painting S.D. and I selected together, and we bought it the first year of our six years here on the North Shore of Boston. To me, it symbolizes our time here. Keeping Herman would keep the connection to that time of our lives.  And yet...."Herman" is a big painting, roughly 3' x 5'. Taking it would require some significant van space.  And so "Herman" is getting sold too.

5. It's biological impossible to take/keep. The spice bush that is now growing on the hill in the front 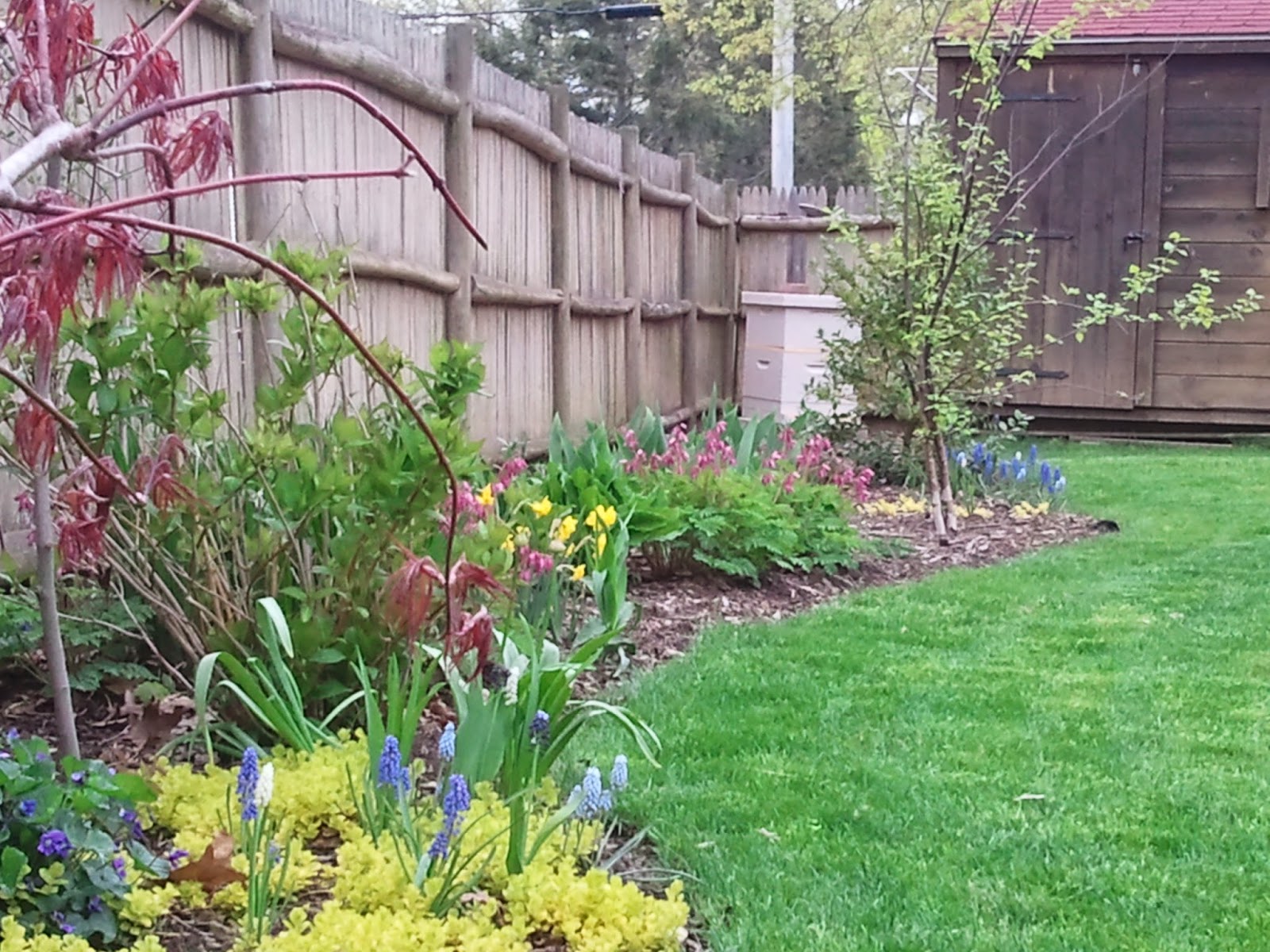 corner is a fourth generation offspring of the spice bush from my first home in Hopkington, RI. In fact, many of the plants in the garden are progeny of plants I've had at other houses. Since 1984 I've moved 7 times, and in all but 2 of those moves, there have been gardens, gardens that often were filled with plants moved from the previous house, or from my mother's last garden. The Siberian Iris's from Tom Wheeler Road, the Shasta Daisies from Clarks Falls Road, the Lord Camden, and Peach Daylillies from the house on Hangman Hill, all in North Stonington. The Blue Lace Cap Hydrangea is from Mystic.  The cranesbill geraniums, Montauk Daisies and Black Bearded Iris are from Mom's house.  Don't tell S.D. but I did, once, seriously try and figure out a way to take something of these with us. After all, many are tubers that can stay dormant for long periods. But, considering we probably won't have a place to plant anything for three years, I just had to let it go. Watching everything come up, one last spring, is bittersweet. I do hope the new owners appreciate them.

And then there are the logistical reasons.

6. Getting someone to just take your stuff, all your stuff is hard. Sure we can find someone who will come in and cherry pick, give us a small check and take most of the stuff. But then we're left with a couple truck loads with no where to go just when we have everywhere to go.

7. Craigslist. Do I really need to say more?  Selling, or giving away stuff through Craigslist is always an interesting experience. Stuff you think will sell, doesn't. Stuff you think no one would even take for free disappears in minutes. And always there are the interesting email offers and negotiations.  It's fun, and interesting if you have a lot of time. Not so great for mass liquidation.

And so, as hard as it's going be we're going to have a yard sale/charity donation. More of a liquidation, we're-selling-it-all sale, two weeks before we leave. Everything we need to keep for the trip and  selected family heirlooms are going into the van, the rest is going to sold or given away.

Whoever said "I think therefore I am" obviously didn't live in the United States.  Here, the correct existentialist statement is more along the lines of "I own, therefore I am".  Without stuff it's harder to know who you are. If I don't own, who am I?

The English language is versatile and descriptive.  It currently contains over 1,000,000 words but even that's not enough. The Oxford English Dictionary adds new words at the rate of 1000/per quarter. And yet, with all those words, old and new. I can't find the right word for my next phase in life.  Or to put it another way, I've got an issue with describing what we're doing as 'retirement'.


Merriam Dictionary Definition of Retirement
a :  an act of retiring :  the state of being retired
b :  withdrawal from one's position or occupation or from active working life

Neither S.D. nor I have any plans to be retiring. Sure, we're not going to be working for a paycheck, but we're  going to be active, and we're going to accomplish stuff. In fact one of the reasons we're 'retiring' is so we can be more active and get more done. Sitting and earning a paycheck while not fulfilling our potential is not living.

What are alternatives to 'retirement'? You could say we're going into activement.  But then that seems a bit too broad. It could be describing a life lived in a gym, or even on a treadmill. We're going to be active but with a purpose, we're going places. Going to live as light and close to the ground as possible. Going to travel as a way of life.  How about travelment?

Travelment
a: the act of traveling as a way of life

And there's lots to do.