Bears, like wolves, are animals I prefer in theory. They are indigenous to all the areas I hike and 'belong' to those areas even more than me, but at the same time the reality of meeting a bear while hiking scares the crap out of me.

Once while hiking up Tecumseh I saw a fox on the trail and for some reason thought it might be rabid. My immediate response was to push S. D. out in front, between me and the rabid fox. The fox casually sauntered off the trail, S.D. was less than amused.

Two hikes later, we were walking up the Wilderness Trail, high dirt bank to the left, Pemigewasset River to the right when S.D. shouts "Bear!" and pushed
me out in front, between him and the bear.  I panicked. What was coming up the trail sure did look like a bear. The blood drained away but just before I  passed out I noticed the pack on the bear's back and a low chuckle coming from behind me.  It was only a hiker, admittedly a very large hiker, but a bearish enough hiker that S.D. thought to extract his revenge for the fox incident. 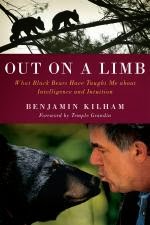 Since then I've been even more worried about meeting a bear. Freezing, while meeting wild animals is recommended in some situations, but not the recommended reaction when meeting a bear. I have often thought research on the topic would be useful but haven't been able to get past the existing literature with names like and Beyond the Bear: How I Learned to Live and Love Again after Being Blinded by a Bear and Bear Attacks: Their Causes and Avoidance (revised edition) Of course I've read the famous, classic and darkly humorous bear section in  A Walk in the Woods: Rediscovering America on the Appalachian Trail (Official Guides to the Appalachian Trail) but that only helped me laugh off  the situation.

And then I pulled  Out on a Limb: What Black Bears Taught Me about Intelligence and Intuition off the library shelf. Written by Benjamin Kilham, a guy who has been raising and releasing orphaned black bear cubs in New Hampshire for over 20 years, Out on a Limb, has some very comforting thoughts for the average hiker. Basically, even when hikers do the exact opposite of what they should do, bear attacks are very rare. It also has a very useful chapter on how hikers should behave.

But even more than offering basic advice for hikers, Kilham talks bears. He knows bears. Where they hang out, what they eat, why you shouldn't bother them while they're eating, who they hang out with.  He even describes how they communicate. "MMMM" is good, growls and huffing are not. If a bear is huffying at you with their ears back, get out.

I confess I am more concerned about food. It seems if you have food, a bear can smell it no matter where it is. If they're hungry and they want it, they'll get it.  The important point here is not to be with your food.  Hang it high in a tree if you want, but hang it (all of it) away from your tent.

After reading the book, I'm still not looking forward to a bear encounter but at least now I have a better sense of what to do. Stand tall, but not raise my arms and attempt to look bigger and more threatening, walk confidently forward if that will not take me into the bear's territory, or away if necessary.


And remember, as S.D. always says, I don't have to be able to out run the bear, only him.