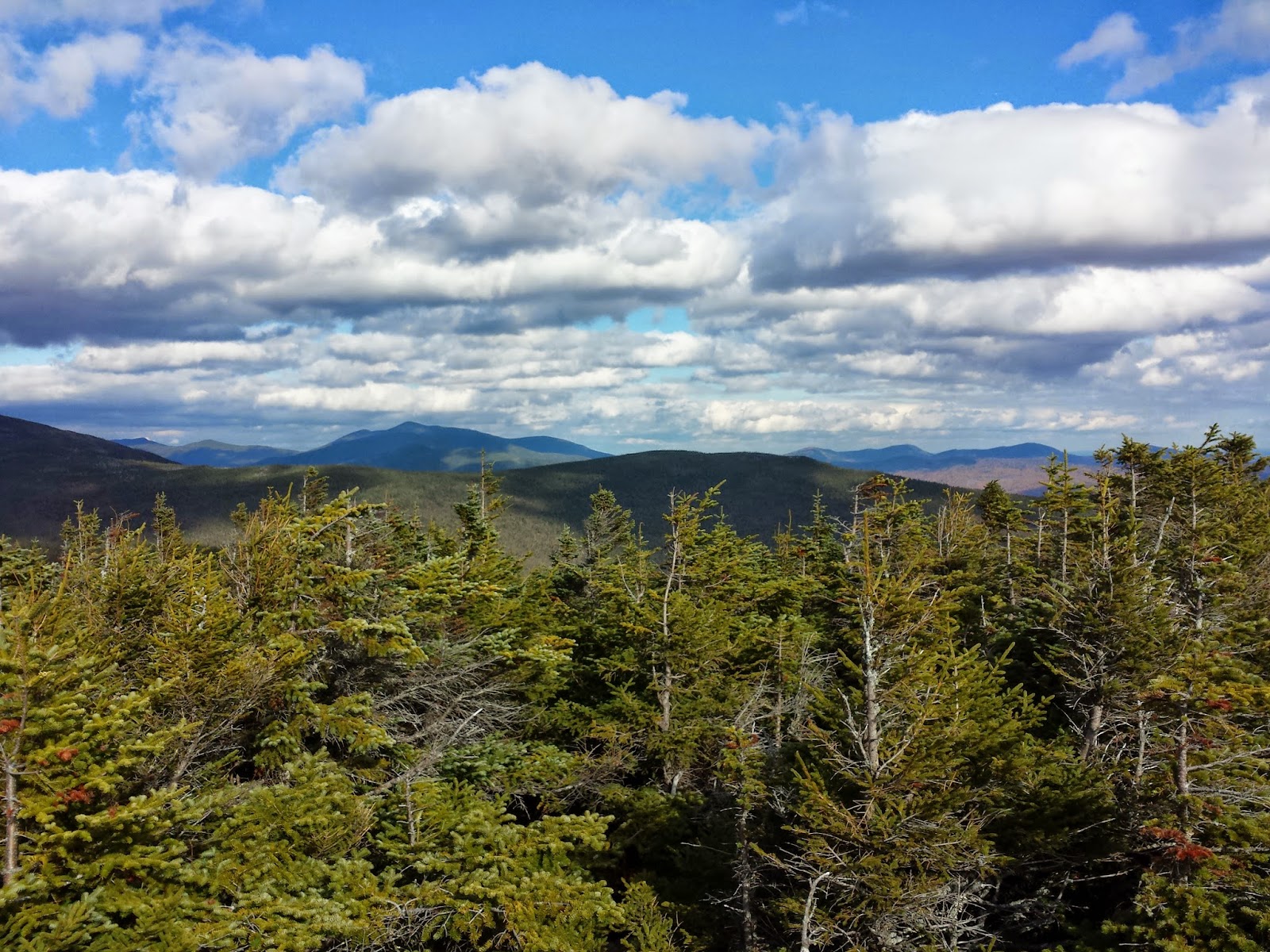 Standing on the summit of Mt Isolation I was torn between getting as many photos as possible, just taking in the view of Mt Washington valley in its fall splendor, and celebrating our completion of hiking all 48 of the NH mountains over 4000 feet. With temps in the 30s and a howling wind it was obvious there wouldn't be much time to do either.  But wow, was it ever beautiful! And we did manage to both enjoy the view and get a few good photos to commemorate the day and the event. 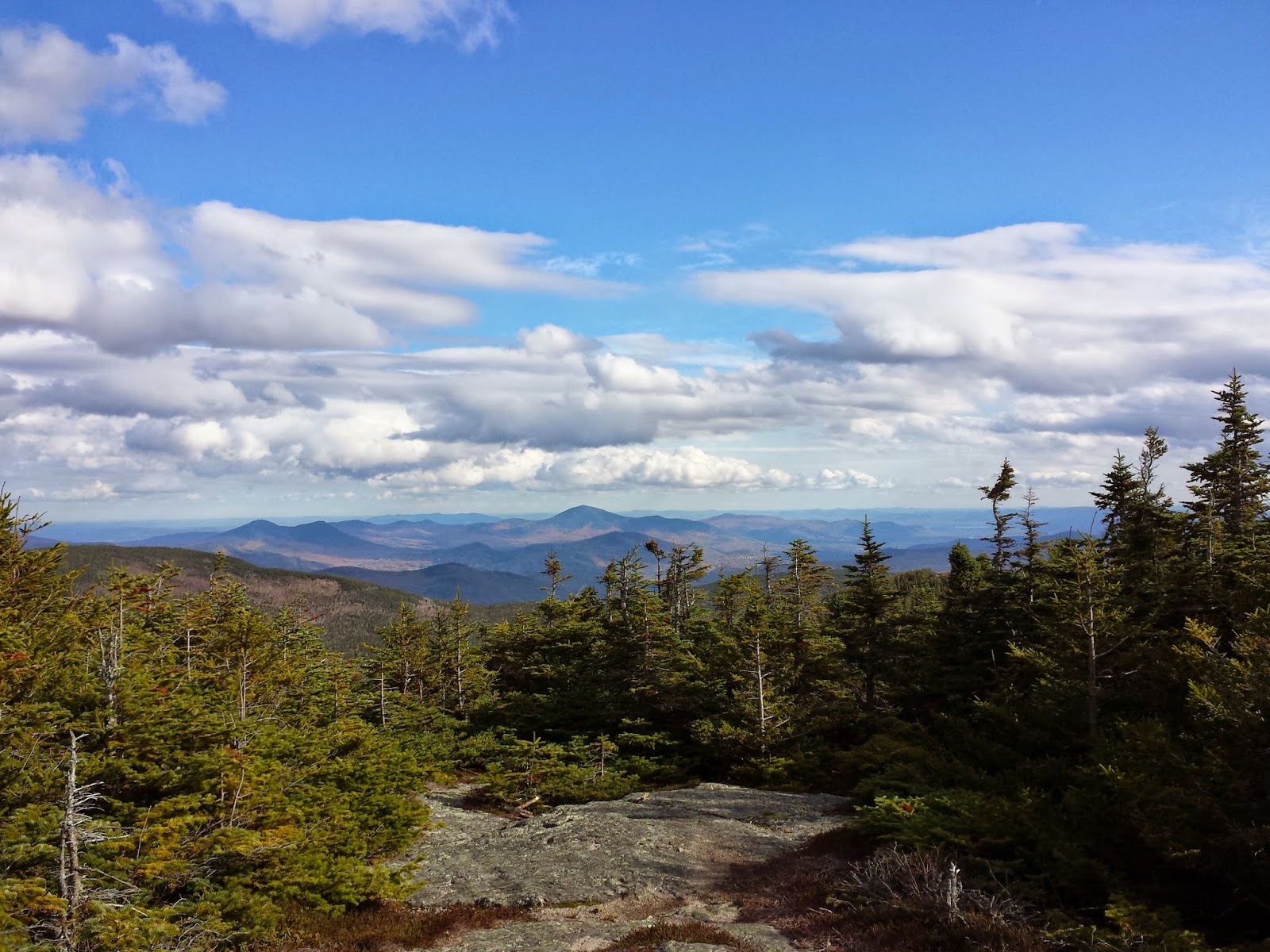 This had been S.D and mys third attempt at sumitting Isolation, the most remote of the 4000fters. The first we had attempted as a day hike and abandoned after only 3.5 miles in the middle of what was an extremely memorable, and even more quotable hissy fit on my part. This time, considering the length of the hike, 14.2 miles, the 11 available hours of sun, and our lack of fitness, along with the desire to do a little backpacking,  we decided to attempt Isolation  as an overnighter. According to the maps and trip reports there was a good tent site less that a mile before the summit that would allow us to hike up, drop our packs, summit and then come back down and spend the night on the mountain. The next morning all we had to do was pack up and hike out. 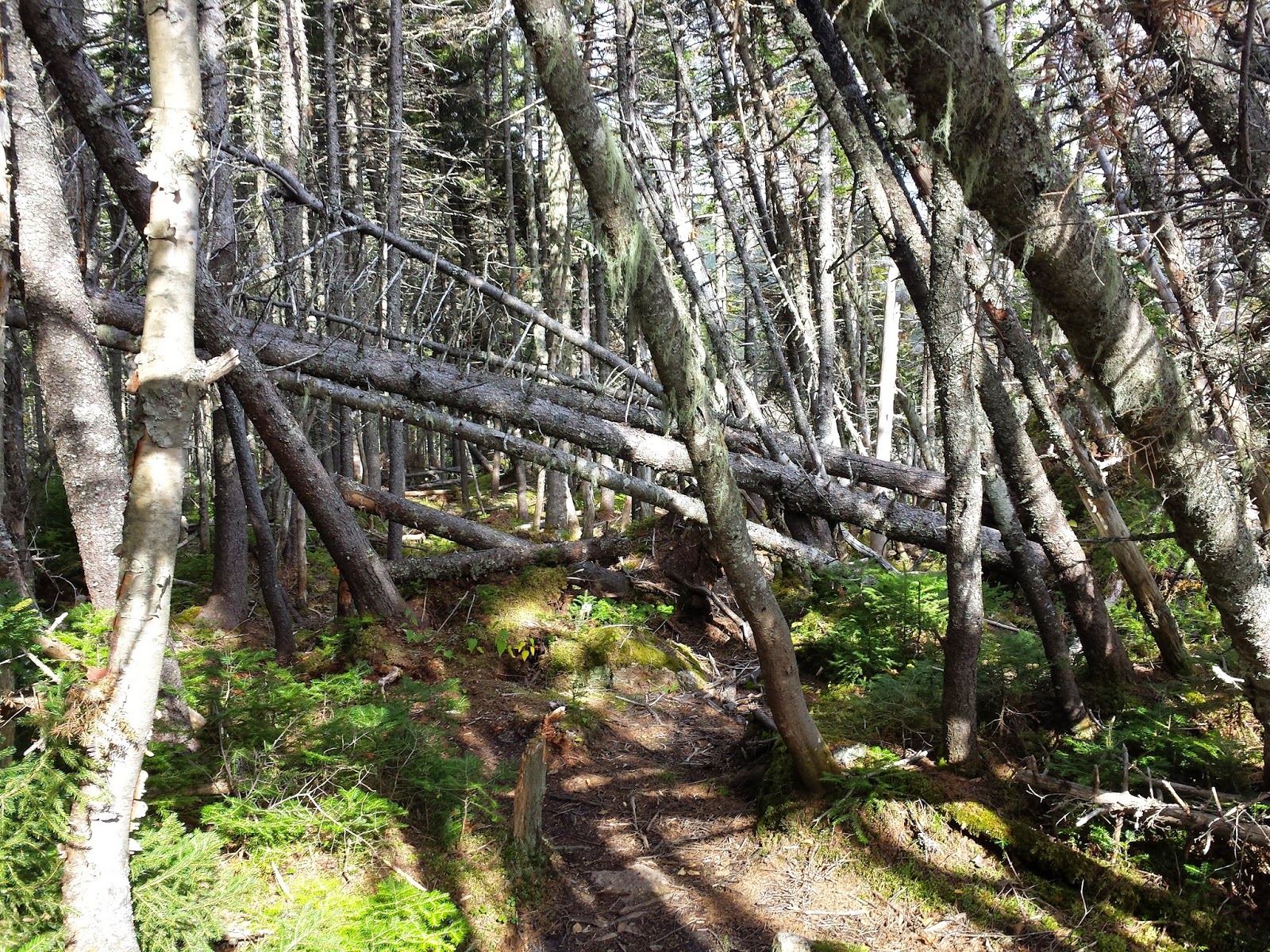 And that's pretty much how it happened. We hit the trail at 9:00. The first 2 miles are relatively steep and through mixed forest. After that comes a 1.5 or so mile section of what another hiker refers to as "a stream masquerading as a trail".  We tried to locate the "unmissable" T that marks the location of bushwack and missed it.  After crossing the Rock Branch we stopped and ate lunch before continuing North along the river on the old railroad bed for another two or so miles. Then headed due west and up for another mile on another stream masquerading as a trail. At one point we met up with three guys coming down. One of them has just finished the 4000fters! There were congratulations all around and we continued on.  Coming up to the pass the trail wound along the side of a valley and through a quarter mile section of extreme blow downs. Luckily some wonderful trail crew had hiked all the way up here with serious saws and cleared the path. Right after those the trail leveled out in a pine forest, the only level area we'd seen in miles and there was the tent site.

S.D.and I scoped out the site, dropped our gear and headed for the peak. Just after the tent site we hit the Davis Path and turned south.  The Davis path, the first path to the summit of Mt. Washington looked pretty good for a 150 year old trail. After a mile we came to the side trail leading up to the summit. From there is was a short rock scramble to some of the best views in the Whites (of course when is any view in the Whites that is not one of the best?) 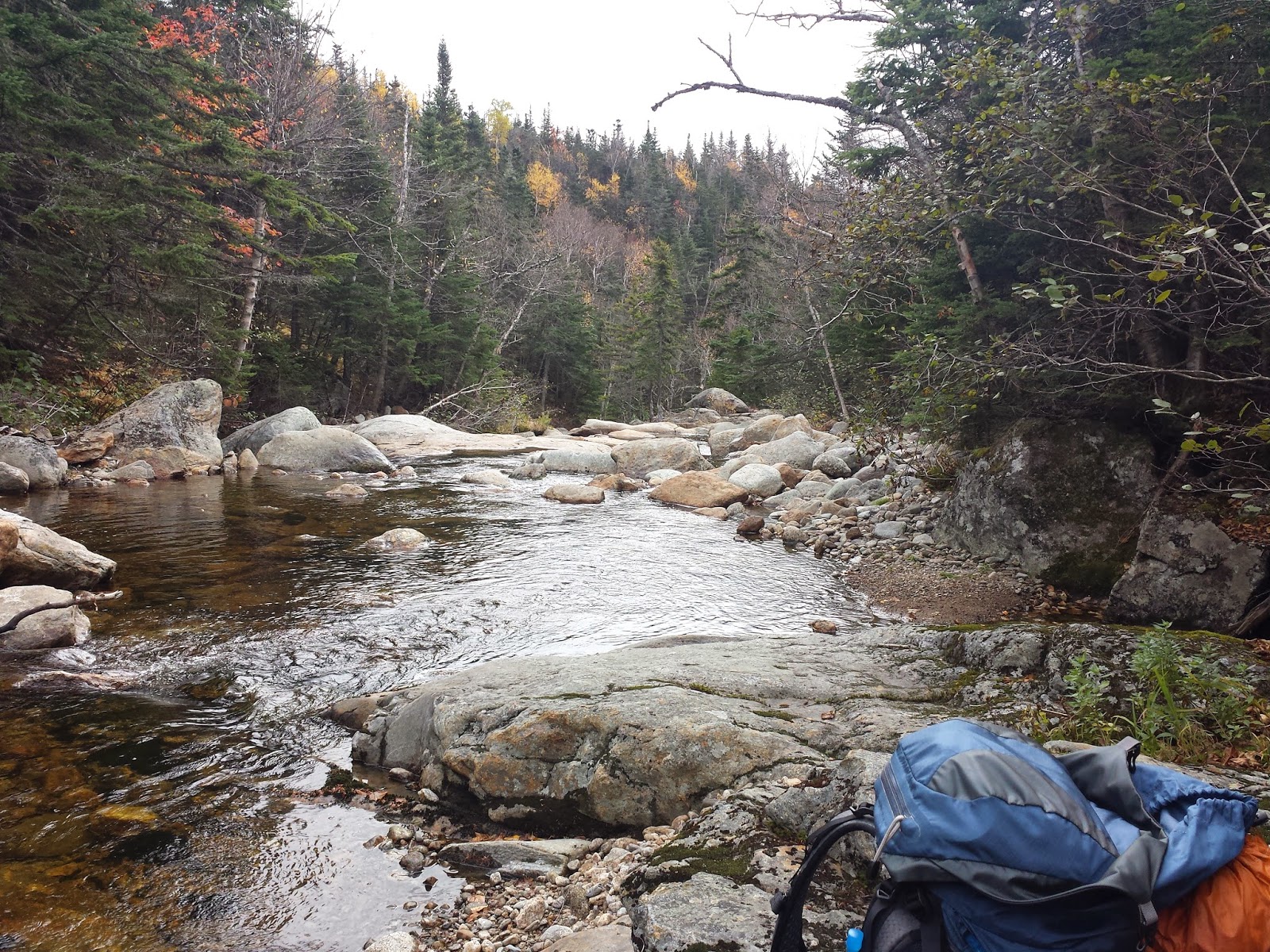 Back at the tent site we unpacked, cooked dinner and settled in for cold night. Temperatures dropped into the low 30's but we stayed warm and protected even as the wind blew high over the site. During the night the clouds lifted, the moon brightened the tent, and two flights of Canadian geese honked their way north.

Sunrise was spectacular. Red and orange but in no way foretelling of any bad weather, the day turned sunny and warm.  We packed up and headed down, stopping at the river for a hot oatmeal breakfast.

Feeling a little more relaxed and confident, I agreed to try the bushwack this time. The idea of this is that you get on the 3100ft elevation line and staying on that manage to cut off a mile of the trail and a significant PUDs (pointless ups and downs). S.D did pretty well with the trail blazing and navigation,  I did pretty well with my not-wanting-to-be-lost compulsion,  we got to see a giant moose, and made it back to the official trail alive.

From there it was just a little more rock hopping along the stream/trail, then down the hill and we were back at the trailhead.

Finishing the 4000fter is bittersweet. Some goals you reach and it's good riddance. After months of training you cross the line of a century and you're done. Yea!  Not so much with the 4000fters.  I'm glad to have stood on the summits of all those wonderful mountains.  Having that goal gave us a clear list of spectacular hikes and challenges.  Plus it got us up some very nice peaks that we wouldn't have normally hiked.  The goal of the 4,000 footer club is to get you out on more of the less popular peaks, it worked and it was worth it.  Now were just going to have to find more great hikes on our own.
Posted by Kelly at 7:39 PM No comments: