The Screen Room and Mosquito Batting 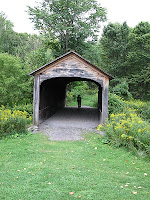 Thursday morning, the rain continued. We took a hike in the morning hoping things would clear, we even checked out the "oldest covered bridge in the United States",  but by afternoon it was still raining. And it was cold.

When car camping we take what is referred to as "The Palace" - a six person LL Bean dome tent that fits a blow up full sized mattress with room to spare, and the LL Bean Woodland Screen Room. Up until camping at Glimmerglass I'd not been an enthusiastic supporter of the Screen Room but sitting inside on Thursday afternoon as the mosquitoes buzzed around outside I was appreciating the finer points of micromesh netting. As the evening came on, more mosquitoes came out, boredom set in. It was at this point, while holding my hand within 1/2 inch of the screen just to watch the frantic mosquitoes try to get through to all that luscious blood I wondered what tomorrow's forecast was. Another day like this and who knows what I'd be doing.
Posted by Kelly at 7:22 AM No comments: 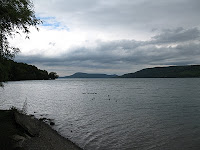 Wednesday morning we headed south from the campground to Cooperstown and Stagecoach coffee. There wasn't a shoulder on Rt 31, but there weren't many cars so the ride was good. The coffee was excellent! After our little caffeine kick we cranked up the West shore enjoying the scenery and the addition of shoulders to the road. There was one giant hill at the end of the loop which I had to shift into granny gear to climb - but I did climb it! and flew down the other side into Glimmerglass State Park just as the rain started.

In the afternoon we sort of solved the mystery of why the Ommegang Brewery, The Best Brewer of Belgian Beer in America was located in Cooperstown, or at least after the beer tasting we really didn't care. Apparently the area was, in the 1800's, the biggest producer of hops in America. They don't grow it there now, they just make the beer and give tours of the brewery. It was a good tour, our tour guide was very informative and although I could not convince them to start making Triple Perfection again, I did like the Witte, Rarevos. Driving back to the tent, in the rain, I felt all warm and fuzzy inside.
Posted by Kelly at 8:12 AM No comments: 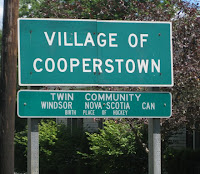 Cooperstown, the town named for one family and run by another. Aside from the Main Street tourist trade, baseball really has very little to do with it. Founded by, or rather owned by James Fenimore Cooper's father, William Cooper's Town: Power and Persuasion on the Frontier of the Early American Republic

is a good book that goes into the details both about the father and the son's involvement with the town. Then along about the 1880s came the Clarks. Not content with running the Singer Sewing Machine Company, and the Dakota as well as founding the Met and a number of other significant museums the The Clarks of Cooperstown

have run their little vacation town for four successive generations.

It is a sweet little town, close to perfect, nestled on the South Shore of Otsego Lake. We set up camp at Glimmerglass State Park and made plans for a ride around the Lake on Wednesday. Our guide this time was Cranks from Cooperstown: 50 Bike Rides in Upstate New York

, a very thorough guidebook to the area, and my daughter.

We had dinner at a dockside restaurant, admiring the Lake and what Amy felt was truly unusual, a lovely, cloud free evening.
Posted by Kelly at 6:57 AM No comments: 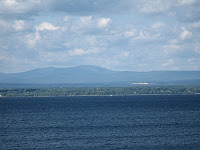 Riding into a 30 knot headwind on the shoulder of road with giant RVs speeding by at 55 mph I again, had to wonder – why? I could be siting in a safe, air conditioned little cocoon, in front of a TV, eating Bon Bons. I do know people who love that, who live for that. Who work all week just so they can do that very thing. It is the antithesis of my idea of life and thinking about it, I pedal faster, drafting a bit off the next passing RV. 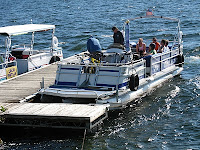 We ended up riding a 36 mile circumnavigation of Grand Isle, VT, After braving the traffic of RT 2 we swung North on side roads stopping along the way to check out the volunteer-run bike-ferry between Grand Isle and Burlington, sampling homemade donuts, watching a para-sailer, touring the fish hatchery and enjoying the phenomenal scenery. From the west shore of Grand Isle you look into New York and Adirondack Mountains, on the east side, the ridge from Mt. Mansfield to Camel's Hump stretches North to South.

It was a great ride for the end of this first half of the vacation. Tomorrow we head to Cooperstown for Part II. The Bon Bons will have to wait.

*Not to be confused with the Bon Ton Roulet.
Posted by Kelly at 6:53 AM No comments: 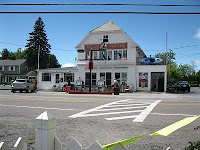 The following day, the Saturday of Labor Day weekend we headed out for a 50 miler. Luckily we had done the 20 before or I don't think we'd have made it. Most of the route we'd ridden last year. North to Hero's Welcome where we stopped for coffee (and a chocolate croissant). Out at the picnic area we met a Quebec couple who were just finishing a 14 day bike circumnavigation of Lake Champlain. One of them rode a Rocky Mountain Sherpa, the bike I'd had for the Holland trip. Twelve miles North of there we stopped at North Hero State Park and talked to a cyclist from Montreal. 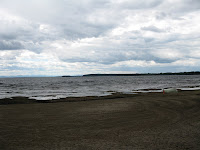 Heading west, with an eye on the building storm clouds, we crossed over a bridge were some kids were jumping off into the water. They'd even strung up a rope swing underneath, and were having a great time. Our next stop was Sand Dunes State Park. Ummm. Well, all I can say is coming from the Atlantic Coast, and having seen Pink Sand Dunes National Park in Utah, I guess I expect a bit more sand in my Sand Dunes. But Vermont seemed very proud of their sand. After all it had been deposited by the glacier thousands of years ago, and while the rest of the entire shore of Lake Champlain consists of tiny shale stones, here on the south tip of Alberg, there is indeed, Sand. Here again were two guys from Canada. The Ranger was American but he was the only other soul on the beach.

Heading home, and pretty hungry by now, we stopped again at Hero's Welcome (they have great sandwiches!), and watched a whole peloton of French Canadian touring cyclists gather. A few Americans stopped by too, but the crowd was predominately French speaking. 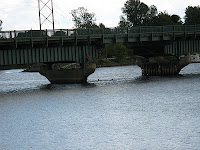 So many Canadians touring, so few Americans. Even if we were only 20 miles from Canada – it still seemed a bit out of balance. It also, perhaps goes a bit further to explain why, when Amy and I rode our bikes around Belgium 5 years ago, the Belgians insisted we were Canadian. “Canada?” “Non, Etats Unis”. “Noooo, Canada!”
Posted by Kelly at 7:34 AM No comments:

End of the Hiatus – Return to Grand Isle 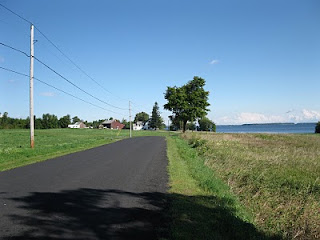 After 3 week out of the saddle being back “in” felt good. Especially going downhill and downwind along the East Shore of Grand Isle, Vermont. Turning West into the wind, nine miles later things began to slow down and when we headed uphill – I probably could have walked faster.

But is was good to be back on the bike, and back in Grand Isle where we spent 3 days biking last year, and planned to spend another 4 this time. The main roads have nice shoulders and while the back roads don't, the drivers pull over, and there are honor system fruit stands with “Welcome Cyclists” signs.

As with last year we relied upon the Charles Hansen book - which is great at directions and also at pointing out the sights. According to him the ride around North Hero/Grand Isle is the best one in all the Lake Champlain region, and after our ride on Monday, I have to believe him.