In 1825 the Erie Canal made it easy for goods to travel from the coast to western America. In 1998 the New York Parks and Trail Commission started an annual bike ride along that canal making it easy for the average biker to pedal those same 400 miles. In 2009 S and I went along for that bike ride.

Logistically it was run much like the Bon Ton Roulet that we rode last year. Scenically and historically it was much different than last year. Also different was the amount of conditioning, and biking knowledge required. The Erie Canal Ride is a great ride for people new to biking and bike touring. It being all flat and 75% on a designated bike path.

Day 1, Buffalo to Medina was no exception. It was flat, mostly on a bike path (most of that being paved), scenic and historic winding along Lake Erie and the canal through lovely parks and towns. And that brings us to the first of 8 or so quizzes related to this historic ride. 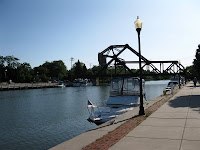 What type of bridge is this?
It spans the canal close to it's beginning and near the town of Tonawanda, NY, but before the town of Lockport and about 20 miles into our 50 mile ride for the day.
There is another bridge like it in Mystic, CT . (with a sign claiming it as the last, or the oldest, or biggest one of its kind)
It is not original to the canal, which was first constructed in 1825, in fact the reason for its existence did not even exist at the time.