Our first weeks at Ash Meadows were spent exploring the dirt roads, seeps and springs of Ash Meadows looking for what we thought were elusive signs of past human history. Looking out over the landscape, this place, like most deserts seems desolate, uninhabited and uninhabitable. What we slowly realized however was that the real challenge was to find one spot that had not been altered by man. And that is proving elusive.

Man's hand is everywhere here. Prior to the white man, Western Shoshone and Southern Paiute cultivated and harvested willow, mesquite and other plants. Hundreds of years prior to them others lived here. No one is sure what changes they made to the land but pottery shards and chert blanket the bluffs and sand dunes.

One of those bluffs is also one few known locations of the rare, endemic, February-blooming Ash Meadows Milk Vetch. Early one morning we rode our bikes North on Longstreet Road, one of the five maintained Refuge roads towards the bluff. Aside from the chert remains we expected the area to be free of other signs of man. Ash Meadows Milk Vetch is delicate and does not like disturbed soil.

All along the five mile road we saw the imprints other 20, 30 and 100 years old roads. We also saw
the remains of one of the hundreds of irrigation ditches left over from the industrial agriculture era in the 1960s.  Three miles in we passed a huge flat turn off behind which rose the tailings from a clay mine. Ash Meadows has been mined for peat (yes peat), clay, borax and zeolite. While not evident to the casual observer, the hills still conceal three massive clay pits left over from the early to mid 1900s. The clay from these mines was used to filter oil. The only current mineral mined in Ash Meadows is zeolite. The small mine in-holding is located at the southern end of the refuge.

Turning West after the old clay mine road we rode by an improbably flat plain, glittering with glass shards. The bulldozed remains of the clay miners camp. This across the road from a deeply furrowed, barren field once used for flood irrigation.

Parking our bikes a little further down the road we walked south toward the probable location of the Vetch.

The soil under foot was really sandy, maybe some clay and alkaline, and it was uneven, even rolling, almost naturally so. Several hundred feet off we noticed a small mesquite grove and headed for that. Mesquite usually means water but this bluff was dry. Several hundred feet beyond that we say another mesquite grove. The trees were taller and strangely enough in the middle of that was a tall, wooden pole? A few more minutes of walking and we found that the pole was really the top  of some sort of water derrick? Beside the pole was a truck frame? and some piping. A little further on a big, now empty, hole that probably, once held water. A slow trickle of water seeped from beneath the derrick. Looking all around in all four directions we saw no other sign of man. No road leading to the derrick, no other structures, not even a probably irrigation field. But here, where we had hoped to find undisturbed land and endemic wildflowers was unmistakably yet another sign of man's activities, and impact at Ash Meadows.

Intrigued by the mysterious purpose of the derrick but disappointed not to find the wildflowers we turned around and started heading back to our bicycles. This time walking a little bit further to the west, more along the edge of the bluff, just in case. The area looked even sparser than that which we'd walked through on our way in but there was no sense in returning exactly the same way.

And that's when we found ourselves walking through chert. Obviously flaked pieces of hard rock. We'd heard that these types of place existed at Ash Meadows. Areas where the first Americans had worked stone into tools. We were amazed at the extent and the beauty of the flakes. However it was more sign of man's impact. Still no wildflowers. 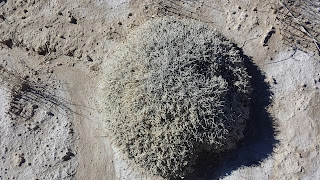 A few hundred feet further, over a sandish bluff, and into some truly alkaline, dry soil and there we found the Ash Meadows Milk Vetch. Not only were they blooming, but they were surrounded by some of the other endemic plants of Ash Meadows, the Sunray, the Ivesia, and more. I don't know what it is about this place, but it touches me. There is a zen garden-like quality to it's sparseness. The area is amazing for its resilience. It's been farmed, mined, drained, stripped, totally re-arranged in some places, and still the springs flow, and the endemic plants grow and bloom in a seemingly inhospitable place, but a place that hides more life, and more diversity than any other place in the United States.