I've been getting acupuncture to heal the old hamstring. From what Hanna (my acupuncturist) says the hamstring tear resulted in lots of broken blood vessels, and torn muscle. That and the resulting swelling lead to a disruption in the flow of energy, in some meridian or other. So the idea is to stimulate the muscle to repair itself and also get the energy to start flowing again. Each session has lasted approx an hour. I lay down on my front and for about the first 15 minutes she'll place the needles (more like pins) all along certain point on my leg. Not the same place each time. Some times there have been pins in my ankle and once in my back, always some around the back of the knee (where the ripping was most severe). Putting them in is really cool. She just taps the end and poink, they just pop in. Usually I don't feel a thing, and if I do it goes away in less than a minute. Then she puts a nice warm light, some rainforestee music, and then goes away while I take a really great nap. At the end she just swipes the pins out.

I've had 3 sessions so far. I think I'll only do one more cause I'm feeling great. The first session in which she also used an ultrasonic thingee to really stimulate the muscles repair, really didn't feel like it did anything. I got off the table from the second one and could walk normally but with some pain.

From talking with others who've had a similar injury they're amazed that I'm back on the bike. And honestly, if I didn't have that hideous picture, I wouldn't believe it ever happened.

Some of my friends have acupuncture for sinus infections, allergies, trauma. I'm not sure what the indicators are but it is definitely effective.
Posted by Kelly at 8:04 PM No comments:

Last week at ACO we were discussing PowerBars. Starting with Larabars, of which I like the cashew, we traveled back through PowerBar history ending with the still sold, original, chew for an hour, original PowerBar.

Simultaneously Wired.com published a related, revealing, yet complimentary to our conversation expose. What's Inside: PowerBar Protein Plus (Laxatives, of course).
Posted by Kelly at 9:27 PM No comments:

Gymnasium is a Latin and English form of the original Greek noun gymnasion. Gymnasion is derived from the common Greek adjective gymnos (γυμνός), meaning "naked", by way of the related verb gymnazein, whose special meaning was "to do physical exercise". The verb had this meaning because one undressed for exercise. Hence the noun, which appears to mean "place to be naked", actually meant "place for physical exercise". Historically, the gymnasium was used for exercise, communal bathing, and scholarly and philosophical pursuits.

Considering the etymology of the word, the Greeks probably did not have Work Out World in mind when they referred to a gym. Not into being naked while working out however, it works fine for me. And although I would appreciate the scholarly and philosophical aspect, so far the closest we've come are "Shape", "Good Housekeeping," and "Cosmo". But irregardless, I've joined the gym for a month. Mostly so I can s l o w l y get back into bike riding. I don't yet have the flexibility to actually ride on the road but I've got to do something....and to make a long story short...I went to today, rode for 30 minutes, so far without pain, and was sooo happy to be moving again.
Posted by Kelly at 9:07 PM No comments: 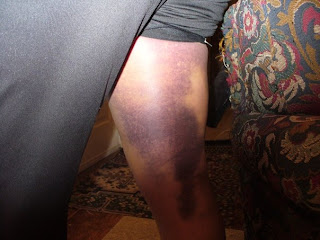 It's not pretty, but the picture included in this post is of my leg three weeks ago, one week after The Accident. Not a thing of beauty, although my artist daughter insisted it was the most beautiful shade of purple she'd ever seen.

...but that is all in the past with a bike ride from Seattle to San Diego in the future. Considering that I've been on my butt for the last 4 weeks, and can't get on my bike yet, there is a bit of work to do. In the next 16 weeks I'm going to gear up with the goal being to ride a century by May 10th (Hence the 1-100 in 16 weeks) and have fun doing it!
Posted by Kelly at 8:54 PM No comments:

Hamstrung -- or a Humbling Lesson in Healing

But at least it's only been 2 weeks so far...but it is soooo boring and like the author, "I finally had insight into how millions of people live with minimal exercise" and it is almost more painful than the injury.
Posted by Kelly at 7:44 AM No comments: