By day 6 of the Seattle/Oregon trip I had Mark Knoftler's “Do America” on continuous play. It seemed like we were going from place to place, hitting the high/tourist spots and with the newly invented BBB scale  I felt like I had a good feel for three new areas.

Ashland, Oregon is a full-on BBB triple threat!  With the Standing Stone and Caldera micro brew pubs less than three blocks from each other, the Bloomsbury independent bookstore and bikes, from sleek racing to around-town cruisers, almost as prevalent as pedestrians it's a beautiful thing. Added to all that is a great used book store, fantastic hiking, fruit -  luscious pears, plums, blackberries, etc, growing everywhere like weeds, and  friendly people,and its a town I could really spend some time in.

Jacksonville, 7 miles East of Ashland, looks good at first sight. Neat, tidy 19th century houses, large sidewalks, and a decent coffee shop. There are a number of bikes in town but you soon notice they are only riding through town. There's neither a bike shop, nor brew pub.  Out of 15 different shops, not a single bookstore, used or otherwise, and while the restaurants offer locally grown food, their selection of Oregon beers was limited. A very sad, missed opportunity for a town. 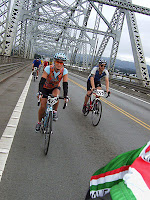 And then there is Seattle, a town once noted for its impressive coffee shop penetration, but now has even more sushi restaurants.  Tourist traffic has also increased in the last decade and the big independent bookstore recently moved from Pioneer Square, North and up to the Capital Hill district. It is a well-stocked, vibrant, if singular store.

Bikes, and bike lanes are everywhere in Seattle - as is a bike-friendly transit system. But somehow you get the sense that the idea is to get bikes in and out of, not around town. Seattle boasts a great outdoor recreation ethic, but all that recreation happens outside of Seattle. It's like a commuter city, a city where everyone lives and the commuting it to the mountains, rivers, and ocean around them.

And the beer? Hmmm. I really can't recall anything remarkable about the beer selection in the restaurants, and didn't see a brewery although google maps does show one, it too is in the Capital Hill district, not Seattle proper.

All in all, I guess I too view Seattle as a commuter town. A decent place to go to Do America and find other BBB towns like Ashland.

We Walked Among Them 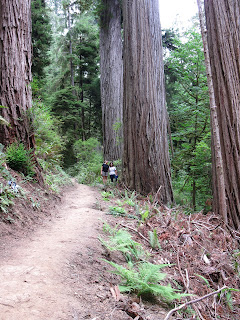 You knew photographs never did them justice but you never know how much, or rather, how little, until you are actually there with them. In the redwoods, the forest is the trees. Huge, massive trunks that you just can't love enough, you hug them, but can't even manage to encircle them 1/3 of the way. You try to photograph them, but can't get far enough away from one to get it in the camera window. At first they are overwhelming, and bring you (me) to tears. Once you've spent a little time with them, it begins to feel just right

We asked the Ranger for a good 5-6 mile hike to see a really big tree (as if we weren't already surrounded!). He pulled the park map out and began highlighting the various hikes and trees in great detail. We decided to hike the 5.4 mile Boy Scout Tree Trail. After a quick trip to the foggy shore of the Pacific Ocean, the mists which make the existence of giant trees possible, we drove west up into the redwood forest. Off a dirt road that often narrowed to one car width between massive tree trunks, we found the trail head and began hiking. The Ranger had shown us a picture of The Boy Scout Tree, a black and white, circa 1920 image of ten boy scouts gathered at the base and climbing up to through the crotch of a massive 'double' trunk tree and seeing it in person seemed as good a destination/excuse as any to walk amongst these trees. Because really, that is what I wanted to do – just be there in this new forest with them. 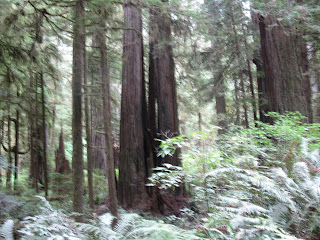 It takes 3000 years for a redwood to reach maturity. The forest we were walking through was much older. The top of Mt Mazama blew off 12000 years ago,forming Crater Lake, the Cascades had been growing for millions of years, and the White Mountains, my backyard stomping ground, had formed 124 to 100 million years ago. Walking among the redwoods, the youngest of them all, I felt not only small, but also quick. A blip. And it both pissed me off that for the most part, people had felt they had the right to decimate the trees, and the earth, and it also felt like a big joke. Man's existence is a blip on this massive time scale where 3000 year old trees are but a second, where one volcano can bury an entire ugly city in one good blow, and no matter how much we try and mess it up, nature, the planet, the universe, gets the last laugh. If we're smart, if we can be comfortable with the meaningless of our part in all this, we can walk amongst it, and know, that that, in and of itself is enough.
Posted by Kelly at 1:00 AM No comments:

Who Wants to Go to Crater Lake?

Around 5700 BC Mt. Mazama blew its top and left behind a big hole, a really big, big hole and this now the bluest lake I've ever seen.

We began this trip with breakfast and pie at Beckie's, a diner on the side of Route 62 described by most tourists guides as a Must, and reviewed, with varying degrees of compliments on Yelp, and TripAdvisor. The most notable thing about Beckie's on the day we were there was the continuous stream of bicyclists stopping there for pie and sandwiches. After watching a dozen filter through the place we discovered they were on a 10 day organized tour around and up the coast of Oregon . Their destination, like ours, was Crater Lake. A 37 mile ride seemed a bit tame to us but hey, it was their vacation. 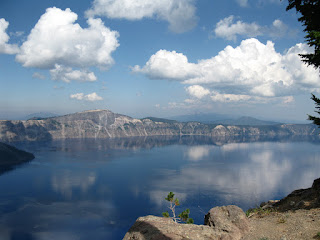 SD and I pulled out of the parking lot in our rental Hundi and soon turned right and up rt 62 to the park. And up. For 30 miles we drove up to the rim of a volcanic lake often passing the bike riders, spinning, later struggling in low gear, we had seen at Beckie's. Once we entered the park, the road became much steeper as it wondered up switchbacks with views off to other mountains. Mt Theisen to the North, Mt Shasta to the South.

We parked at the rim and took the trail to Mt. Garfield. Hiking up alongside the lake, the view more amazing at every turn. Views that would even be worth a day long bike ride straight up a mountain!

Who wants to go to Crater Lake? I do! I could spend hours and hours there and never not be impressed by each new view...and come to think of it, it would make for some amazing kayaking!
Posted by Kelly at 7:01 AM No comments:

The BBB Scale: a proposal for town assessment

When bicycling through Holland Amy and I quickly learned that the first stop in any town should be at the VVV (tourist information stop). The VVV is the place to get info on the town. Not only can you get info on campings, bathrooms, bike routes, but you can also get a feel for the town. In the States, it's not so easy but while in Seattle last month,  I decided that  the tenor of a town can be determined by looking into three factors; Bikes, Books, Beer. These three valuable indicators are indicative not only for their literal value but also for what information they tell about the town.

The ideal town would have a ratio of people to independent bookstores of 1:200,000. These bookstores would carry titles by local authors, have a large section of high-quality local history books, sponsor author talks and book groups, and be generally supportive of book culture.

The high scoring town would also have a thriving bike-commuter population as evidenced by real bike lanes, not the suicide lanes such as in Boston, and plentiful and secure bike storage. Support of bike commuters is not just in and of itself important but also indicates a culture that supports outdoor recreation and is trying to make a dent in the U.S. car culture.

And finally good beer, or more to the point, micro-breweries, would be a celebrated by the perfect town. This important aspect of the BBB scale measures not only the actual presence and support of microbreweries, but also the prevalence of micro-brews on tap at the local bars - both high and low dollars. High support of micro brew culture is an indicator of local support for alternative, small businessmen, and locavors, all desirable qualities in a town. A symptom of a town that is proud of its accomplishments and people and can have fun doing it.

In the end, that is what it's all about, trying to find the town that is the most fun (Even if it's my definition of fun!) and that town has bikes, books, and beer!
Posted by Kelly at 6:55 PM No comments: