The new queen arrived on Friday.

S.D. waited for a break in the rain, walked the hive over to the far corner of the yard and shook all the bees out.   The idea behind it being that all the non-working bees and the existing queen, if she existed, wouldn't be able to find their way back to the hive. Then he set up the empty hive back in it's old location, for the working bees to find.  The drone comb he put in the freezer to kill the larvae.

On Saturday, we waited for another break in the rain, a break that turned out to be the only one. S.D. installed the new queen, and returned the now-dead drone comb.

If the bees can clean out the drone comb, if they accept the queen, if the queen starts laying the minute she's out, and if the other bees live long enough the raise the new brood, then we just might have a bee hive.
Posted by Kelly at 7:45 PM No comments: 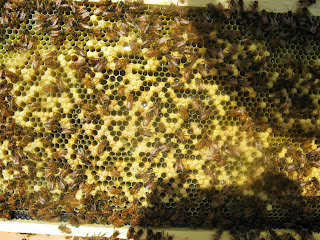 Bee'maggedon has come and it is now time for the overlords to play their hand. While we were patient beekeepers for the last month our hive has not done well. Short of flying off, they've done about as bad as a hive can do.

When we checked in on them Sunday, all we found was 'drone comb'. Pictured here it's basically a messy laying pattern, which means our queen, didn't get mated and is only laying sterile/male/drone eggs. Drones take longer to grow, supply a perfect breeding ground for mites, and do nothing but hang around the hive and eat (and breed if there is a queen in need of services). All similarities to human males aside, it's not the makings for a productive hive.  In fact once they hatch and the nurse bees dies, the hive will die.

So we're going to do a little killing in preparation for a new queen.  S.D. ordered one yesterday and by the time she gets here we hope to have all those drones, and drone cells out of there.
Posted by Kelly at 12:46 PM No comments: 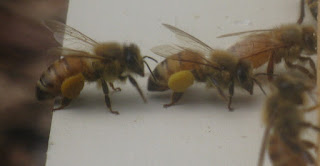 All the bee people are telling us "The Nectar Flow is On".  Not exactly sure what that means but the pollen is certainly coming into the hive.  It only took a few minutes to snap this photo of two workers with loaded pollen sacks. A few days ago they were bringing in mostly green pollen but now its mostly yellow. The green was definitely from the maple trees. Not too sure about the yellow. 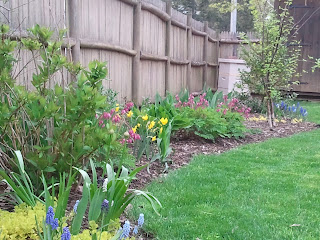 Also, this is the 'beauty shot' of the hive location at the North end of the garden. You'd think with a set up like this, they'd be the happiest of bees.
Posted by Kelly at 7:53 PM No comments:

Remedial reading. What's up with the hive?

It’s been 10 days since our last hive opening and time to take another look. During Bee School we'd attended a hive opening and watched a professional look at the individual frames and tell us how the hive was faring. It was like he was reading a book. For instance one of the frames had these giant cells hanging off the bottom. That meant the hive was raising drones, as he looked around the rest of the frames he was able to read other clues that explained why.

Now it was our turn to try and read hive. And it was going to be a remedial reading at best.

We already knew the workers had been busy. We'd seen some of them returning with full pollen sacks(yes I crouched at the side of the hive entrance waiting for that brief moment when they land but before they scuttle onto the hive. Just to catch a glimpse of tiny little insect legs bulging with brightly colored pollen, mostly green). Pollen gather can be read to mean that the bees are probably feeding eggs and pupae. But the real proof would come with the hive inspection.

For this, the second hive inspection, we understood that we were to try and find the queen (again), see if she was laying eggs, spot some cells with eggs, developing larvae and capped cells (to show that she’d been laying for at least 10 days) and check that the workers were attending to their various jobs. Ideally the queen lays her eggs in consecutive cells in the lower parts of the frames forming a neat half-circle pattern, and the workers would have drawn out more comb, been feeding the eggs and creating royal jelly for them to float in.

So what did we see? In the outer 3 or 4 frames, we saw bees. Still lots of bees. No more than last time, but really not many less either. We saw lots of eggs covered in royal jelly. We saw some round larvae and maybe some capped brood? We can’t say any of this was in too organized of a pattern. I think we even saw some pollen stores. Not enough to warrant all their gathering activity, but some. Aside from the fact that the eggs, pupae, etc were roughly grouped together, and there wasn’t any discernible overall pattern, it all looked okay, at least to us.

Then we got to the inner frame. Still lots of bees, but we also saw would looked like a cells with multiple eggs and one cell, wider and more drawn out than the others. A Supercedure Cell. Multiple eggs in cells is a sign that the workers have started laying eggs. Workers can only lay sterile eggs that result in drones, and they only do that on very rare occasions when they aren’t happy with their queen. A supercedure cell means the hive has decided to raise her replacement.

Being new to hive reading, we weren’t sure how to interpret all this. After closing everything back up S.D. called our beekeeping mentor. A quick conversation confirmed our reading. The queen had been released on schedule and she had started laying eggs. The hive was doing a good job caring for and raising their new bees and they had also, for some reason, decided they needed a new queen. Due to the presence of newly laid eggs in the outer frames, it appeared that she was still in the hive (although we again failed to find her) but for some reason our bees felt she needed to go.

It’s going to be another two weeks before we can peek inside the hive. During that time, if we read the situation right, our bees will continue feeding and caring for all the eggs, and brood. Some of the new bees will have emerged and started their lives as good worker bees. The bees will also continue building out that supercedure cell and raising the queen. Depending on when they started, we could even have a new queen by then.


--- Sorry about the long time between entries, it’s been a busy time of year. More entries on our trip to Death Valley are also in the works. Please feel free to leave comments, I do read them, even if I get too far behind.
Posted by Kelly at 7:51 AM No comments: