Apparently, for all the adventures we undertake, SD and I are homebodies. Having a home, be it a van, tent, RV or an actual house, that we're happily settled into is a necessary prerequisite to regular blog post and adventure. Like mountaineers summiting a big peak, we need a Base Camp. And that Base Camp needs to be organized and manageable.

Here are just a few of the highlights from the five months of settling in and setting up our latest Base Camp.

First and foremost were the spider wars. We lost the first round. It was only the onset of colder weather that caused their retreat and is giving us time to prepare for next summer's onslaught. But when they were active, they were everywhere and according to Alyssa, we had all kinds. Our best defense will be daily soffit and web sweeping. If they can't build webs, they can't trap food. All I can say is that it's a good thing we're not scared of spiders.

Getting back into house cleaning was also an adjustment. It took only 30 long minutes to completely clean the trailer. It's been 5 months and I don't think this house has been completely cleaned ever. The good news is we discovered robot vacuums. Eufy is now one our best friends. In a little over an hour he picks up all the house dust and spiders too.

Finding the right stores was also an important part of getting settled. Aside from the Chiloquin hardware store, we spent the first months shopping in all the wrong places. It wasn't until after talking to the mattress salesperson that we started getting our groceries at Sherm's Thunderbird, wine at Rosterolla Wine, and our meat at Howard's Butcher Shop.

Settling in has also meant learning about dead skunk management. Did you know a skunk can stink for up to 6 months after it dies? Yup. SD found one all dried up under the deck by the front door. It stunk, but since it was already desiccated he figured that if he buried it in the wood chip pile, it wouldn't stink and would be composted by spring. Skunk composting was going well until we got the dog. (And yes, getting a dog is key to settling down). When the wind blew off the pile, Terrence's little nose picked up something good. Despite our best efforts to deny him, one day, or rather one minute when I left him to move some firewood, he dug that think out of the pile and was joyfully running toward me with his desiccated prize. Thanks to the web we learned that a mixture of hydrogen peroxide, baking soda and dish detergent neutralizes the odor...until the dog goes back into the pile and pulls out another skunk scrap.

Getting back to work with all this excitement going on has also been a challenge. I've been extremely fortunate to have been asked back to work, virtually, from my old job. The project is great, the people too. But sometimes it's hard to sit at my desk while the spiders are just outside spinning their webs, the dog is running by with dead carrion and the weather and the view are breathtaking. 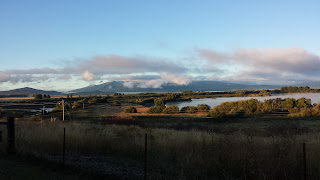 Have I mentioned the view? We still haven't adjusted to living in this place where every moment, in every direction is just more stunning and spectacular than the last. I hope we never will.

Settling in as we have over the last five months I've also come to realize it's not so much a view as a setting. Mt McLaughlin, Pelican Butte, the Mountain Lakes Wilderness, the Sky Lakes Wilderness, Modoc Rim, and Agency Lake, the sunsets, sunrises, rainbows, lightening storms, clear full moons, bright starry nights, it's more than just beautiful. They are all the stage, the setting for this adventure.

Now that we're settled in it’s time we can start exploring and writing about the wonderful places around us.
Posted by Kelly at 7:03 PM 4 comments: