Zero Degrees in The Sun 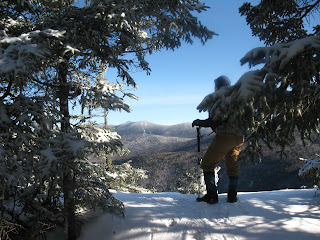 The trick to hiking in 0 degree weather is to keep moving. From the trailhead where you open the car door and get that first frigid blast to three miles up the trail when it's time to break apart the frozen banana, or on the summit, crunching through a peanut butter, jelly, and ice crystal sandwich, you have to keep moving. You really can't even stop long to gaze North at the magnificent view of Mt. Washington rising out of the Presidential range, or East to Mts Passaconaway and Whiteface, and especially South towards Lake Winnipesaukee where the North wind smacks into the mountain.

But boy is it worth it! Our hike last Monday up to Sandwich Dome, via the Sandwich Mountain trail to Jennings Peak and then returning via the Drakes Brook Trail, was Cold and stunningly beautiful. It had snowed two days before, and the snow still hung on every tree branch. There was no wind in the valley and everywhere was a still silence. Except when we walked, and then the sound of our boots crunching on the snow filled the empty space. SD had been hoping to see a deer, or even a Moose but soon realized "We aren't going to sneak up on anything today." Of course we had to stop moving in order to hear each other talk so conversations were limited. 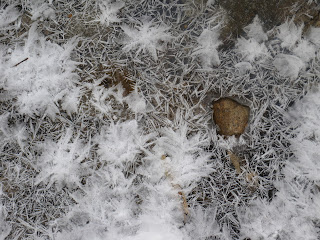 There were lots of great views along the Sandwich Mountain Trail, and even more from the summit of Jennings Peak. We had intended to continue on to Sandwich Dome but had reached our turn around time. What with having to flounder up some icy stretches we hadn't set a very good pace. And with those same icy stretches in mind we decide to hike back on the longer, but less steep Drake's Brook trail. That too was especially lovely in the cold. In areas where the water was fast, the brook still ran while in other, flatter sections it was frozen, with ice crystals freezing above it.

By the time we arrived at the car I was ready to sit directly in front of the blasting heater, but looking back to the mountains as we drove away also wished I was still crunching along through the winter woods.
Posted by Kelly at 10:16 AM No comments: