Just about everything that could, has

Yesterday we went into the hive and see if the new queen had been released. Hoping that she had, the hive had excepted her and she was busy laying eggs.

What we found was the queen and about 6 other bees all stuck in the queen box.  They had chewed through the candy plug and somehow released a flap that kept them trapped inside.

The rest of the hive looks much the same. Messy, and now dead drone brood but still with lots of bees.

We shook the queen and all her cell mates into the hive, and closed it up for another week.
Posted by Kelly at 7:05 AM No comments: 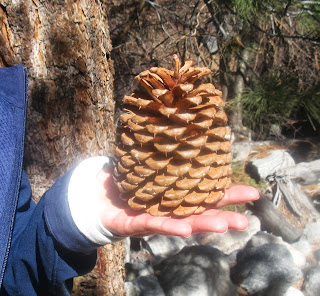 [Remember way back in March when we went to Death Valley? This  is one of two remaining posts from that long ago vacation] 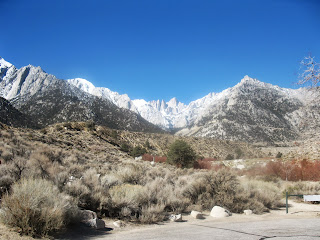 There are times when I struggle with the leave no trace take no thing ethic.   Hiking up to the Whitney Portal,  the trail littered with perfectly formed giant Douglas Fir pine cones was one of them.

At the trailhead, 3 miles and 2000ft below there hadn't been a single tree. Like most of the landscape we'd been in, it was all desert. Slightly lusher than Death Valley, but  obviously still  the 'land of little rain'. The further west and up we hiked however, and especially when the trail dipped into the Lone Pine Creek valley, the vegetation increased, and the landscape became greener. At first there were small, lone pines, and then some flowers. The view of Mount Whitney was impressive, but far off in the distance, one little peak in the ridge line of the Sierras.

Rounding a bend in the trail and entering the creek valley we began to see snow and birds. The trees began to look more like a forest. 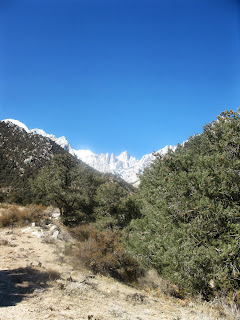 Scattered on the ground were numerous pine cones roughly 5 to 6 inches long. In the book Salt to Summit: A Vagabond Journey from Death Valley to Mount Whitney

, Daniel Arnold mentioned how the Timbisha Shoshone lived off pine nuts. Somehow while walking and watching the birds picking at fallen pine cones I began to connect those expensive little packages of cylindrical nuts from the grocery story with the Timbisha's nuts. When we stopped for a little break I leaned over, picked up a pine cone, pealed back one of the scales, and sure enough - there was a pine nut! And it was good. S.D. was a bit reluctant to try it, but he did. Later he was a bit annoyed when I kept stopping to sample more from pine cones scattered about the trail. But the novelty of it was too much to pass.

The trail by this point, was following closely upstream beside Lone Pine Creek. The valley was narrowing and the trees were getting taller and straighter, and our views of Whitney became fewer but more spectacular. Passing the intersections with Mescle trail we entered a mature Douglas Fir forest. The trees so high and so lush, being watered by both the creek and the rainfall and the understory was clear except for the presence of Pine Cones. Foot long Pine Cones, perfect examples of the Fibonacci principle in nature, dark, nutty brown, smelling of the forests. 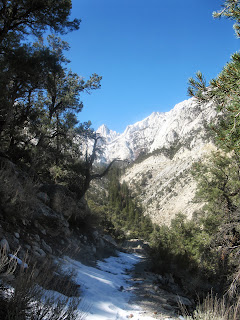 I picked one up, then another, and marveled at their perfection. It was then I experienced my crisis of consciousness. What loss would there be to this magnificent forest if I were to take just one? Who would know? Really, what impact would it have here? How lovely a reminder of the trip it could be back home on the mantel?  I could look at it everyday and remember this desert to forest to Mountain hike and feel...guilty?

But why would I feel guilty about taking the pine cone and not about eating the pine nut? I put the pine cone down, deferring  those deep physiological questions for another day and went back to enjoying the forest and the ever more increasingly awesome views of Mount Whitney and the Sierras.
Posted by Kelly at 6:41 AM No comments: