The Bee as Metaphor

Often, when walking by the hive, I find myself inadvertently reciting  Issac Watt's classic divine and moral song for children.

----
How doth the little busy Bee
Improve each shining Hour,
And gather Honey all the day
From every opening Flower!*

It's not a top twenty hit but it does go a long way to describing bees.  They are busy all the time! Busy as bees, as the metaphor states. Bees, in face, are the object of many metaphors.

Take the Worker Bee. She is both a capitalist and a communist metaphor for the perfect worker. They are up first thing in the morning. No burning daylight for a bee. When the dawn is slow, or a bit chilly they will crowd up on the hive board, just inside, waiting for the second the temperature shifts to flying weather.

Once the worker bees start flying for the day, it's a constant stream of nectar and pollen gatherers out and back. These days when there are so many bees, the traffic gets too heavy and there's whirling back up just before the entrance. They are born working, and they die working. Admittedly they get a lot done, but they only get enough of the 'profit' to keep them alive through the winter.

And then there is the drone, or male bee.  While there are no current metaphors for the bee who's only purpose is to have sex with the queen and die, there are a number of related meanings.  In the 16th century drone was given the figurative sense of 'idler' or 'lazy worker', as male bees make no honey. In our time drone is most commonly used as the name of an unmanned aerial vehicle. It's a connection that is unclear. Not sure how one gets from the idea of a male bee flying around looking for sex to a brainless piece of equipment. .. oh I think I get it now.

The most popular bee metaphor however is that of the  queen bee. But unlike the others' it doesn't reflect real bee behavior.  A human 'queen bee'  is a woman who is the "leader of the pack, an extremely confident woman who's biggest fault may be she is too extremely confident." A true queen bee spends her life laying eggs under the watchful eyes of the worker bees. She gets one "maiden flight' during which she is promptly and repeatedly 'unmaidened' by the otherwise superfluous drones, and then it's back to the hive for a life of egg laying...until the workers bees decide she is unsuitable and kill her. If you are ever compared to a queen bee, watch your back.

The most unflattering metaphor that relies upon the functioning of whole hive is that of the Borg. A collection of species that have been turned into cybernetic organisms functioning as drones of the Collective, or the hive.  Resistance to joining the Borg is futile, and while there is a Borg queen, they do not do anything useful like pollinate flowers produce anything as wonderful as honey. Upon that premise, I think the metaphor should be disallowed.

The good news is the Hive is also the foundation of many good metaphors and has been co-opted by artist co-operatives, farming co-ops,states (Utah) and even bike shops to symbolize a collaborative group of individuals working for the common good.

But really, they're just bees, and all the metaphors are human projections on an insect with an elaborate social survival strategy...that is fun to watch.


*Against Idleness and Mischief
Posted by Kelly at 4:26 PM No comments:

With the Holiday weekend approaching and the summer vacation season upon us I'd like to take a break from the regular adventure posts to highlight ways NOT to be adventurous. In other words, walk, run and bike safely!

Walkers and runners:
1. Walk and run on the sidewalk where available
2. If there is no sidewalk, walk and run facing traffic, on the left side of the road

Bicyclists:
1. Ride in the road. Riding on the sidewalk is dangerous because sidewalk site lines were not set up with bicycle speeds in mind
2. Ride with traffic, on the right side of the road. 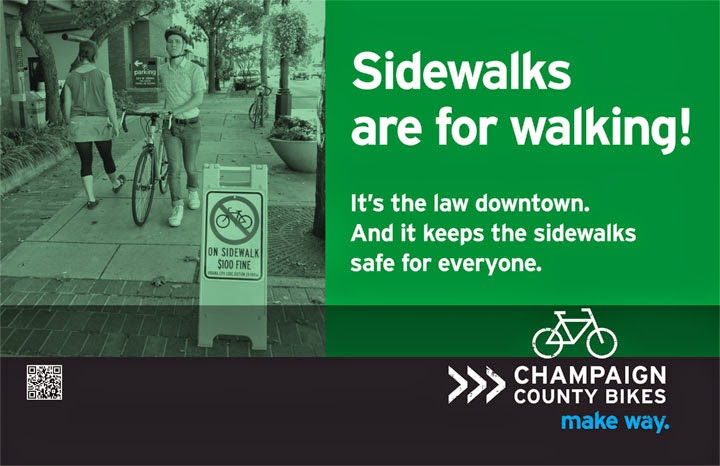 The consequences of doing it wrong are serious, and the danger so obvious, and the obliviousness to the danger so flagrant that I am tempted to post one or more of the following signs, or pass out flyers. Not sure which would be more effective/obnoxious.Votes, comments and suggestions are appreciated. 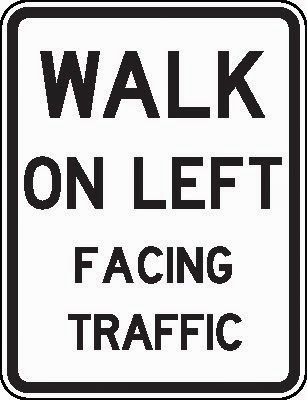