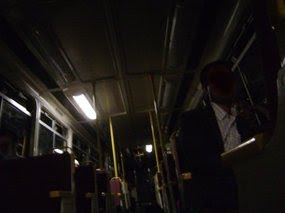 This morning the train was dark, as in no lights, no electricity. Had it been a sunny morning the only inconvenience would have been the loss of wifi. But on this gray, rainy morning it was downright eerie. We all spoke in hushed voices and wrote sentences that contained phrases like “hushed voices.” Had someone screamed 'murder' no one would have been surprised, especially when we went through the tunnel at Salem (you know the one with all the witches).

The diversity of things that can wrong on the train seems endless, and if you're not in a hurry to get to work, rather entertaining. Last week the 5:25 train was an hour late getting to Manchester. The train, two trains previous had, according to the conductor, “caught on fire.” After getting that one off the tracks the next train had to make extra, and longer stops to pick up all the discharged passengers. Two days previous we had been delayed leaving North Station because “someone forgot to change the switch.” We then were treated to a play by play account of how that someone was 'coming out of the house”, “approaching'” and then “throwing the switch'” I certainly appreciate the communication' I'm not so sure that the other passengers were as amused.

Two weeks before all this the hour delay was remarkable not because it was a whole hour but because we arrived at North Station at all. This was the day of the big storm. A number of commuters didn't make it to the train that morning because their power was out (and alarms didn't go off) a number couldn't make it because there were giant trees in their driveways, or getting by that, their cars were not able to ford the rivers that now crossed the lower parts of road. When those of us who did get to the station saw a train approaching we were amazed. The amazement only increased when we boarded and were informed that this train was actually the 6:05. The train that was supposed to be here 40 minutes ago. Not only did the MBTA have a large number of really large trees to clear off the tracks but several of the road crossing gates had been broken and the conductors had to get out and manually stop cars at each and every crossing. We (and by we I mean 3 train loads all packed into 1) arrived at North Station at 9:03. It had taken the train 3 hours to do its normal 1 hour run. But the really surprising thing was that it had done the run at all. I number of folks in the greater Boston area couldn't get anywhere near Boston that day.

The MBTA and for that matter, all mass transit is a great thing. Who knows what traffic nightmares I've avoided by the taking the train. I do know I've saved some money and used less of the limited precious resources on this planet. I've also joined a select community, one I would not have known had I been in a car cocoon. It's also interesting to note that the conductors do no collect tickets on these days, and if you've prepaid for the ride you get a credit for another. And just think of all the new stories I can tell.
Posted by Kelly at 1:54 PM No comments:

Back in the day at Eastern Mountain Sports we had a life size cut out of ultra-marathoner Dean Karnazes. We had received it as part of a promotion for his autobiography, Ultramarathon Man: Confessions of an All-Night Runner

. For a few weeks it stood at the front of the store and then Brian moved it to the back. To the bathroom actually, where every time you turned on the light the thing would scare the crap out of you. Because that thing was scary! Karnas was in full tilt, half naked, full wild-man running mode – and aimed right at you. But it not only scared the crap out of me, it also pissed the crap out of me. I've always really admired the long distance athletes. Marathoners, ultrmarathons, rides across the country, all that is just really cool . And here was this weird parody of a man representing all that in a way that was even scarier than most people already viewed it. Well actually, most people think distance events aren't so much scary as they are crazy.

And thats what brings us to today's topic - the Book Born to Run: A Hidden Tribe, Superathletes, and the Greatest Race the World Has Never Seen

– the bestest book ever on running, long distance running, and the human body's true function and potential. Revolving around the story of one man's running injury and a tribe of life-long runners in Mexico, the author relates the history of running, ultra-marathons and marathoners, (in which he also mentions the exception that is Karnasses), human evolution, the evil that is the sneaker industry, the beauty that is the human foot, the misguided advise of the medical profession, and the potential in all of us.