They're Just Here For the Sex

It was less than a month ago, mid-July, that Dave and I moved into our new home. We closed on Tuesday and began moving our stuff in the next day.  Apparently we weren't the only ones moving in.  As we emerged from the truck swarms of bugs flew up from the grass, down from the leaves, and out from under the eaves of our dream home.  They hadn't been there for the initial showing, the house inspection or the final walk-through just two days ago. Now they were everywhere.
The previous home owner also happened to be there as well,
hauling away her last load. She wasn't the least concerned about the bugs, "they're just here for the sex" she told us. Then drove away.

Well, the sex at our place must be awesome because the bugs are still here. Dave discovered that they are called Klamath Midges, that they don't have mouths (something he's assured both me and the guys replacing the septic system numerous times), that they generally live at the bottom of shallow lakes and indeed, they only come out
once a year, for the sex.

The nights here are beginning to calm down. It may have
something to do with the flock of magpies that now arrive every evening just before dusk and hungrily feed on the midges, or it could just be that all midges have done their business.  Dave and I, on the other hand have lots more to do. Last night the full moon rose after a quiet, midge-less dusk. Dave and I sipped our wine, looked out across the Klamath Basin and thought....those bugs certainly know how to pick a romantic spot. 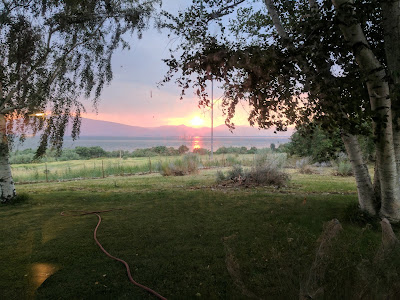