A while ago I lamented (via facebook) that chocolate and beer didn't go together. Several of my friends were quick to correct me. It appears that not only do many folks think they do but that also there is chocolate beer. Which left one more question unanswered. Which chocolate beer is best.

And the answer is - chocolate and beer go very well together, most especially in Youngs Double Chocolate Stout!

Are there any other contenders I should try?

Fond Reminisce on the "Semester of Death" 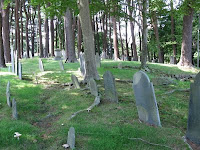 Sunday we rode our bikes through Essex, Gloucester and Magnolia to Manchester-by-the-Sea stopping briefly at the bestest cemetery ever and bringing back all the wonders of a college semester spent studying Emily Dickinson, James Joyce, and "The Puritan Way of Death". Can anyone possibly image a happier way to spend a gloomy New England spring? Since then, I've never been able to think of those two authors as anything but dreadfully mournful but I have come to embrace all that is good, happy and wonderful about Puritan death practices. Most especially their gravestones! And while Connecticut, the second official colony, does have some good stones, it's nothing like the wonders found in Eastern 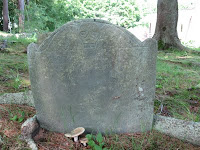 Manchester's "Old Cemetery 1661" sits on a hill just to the east of town, surrounded by a iron fence, overshadowed by tall pines and populated by stones (and people's remains). In it too are beautiful examples of the classic gravestone engraving progression from Death's Head, to Cherub, to Willow and Urn. Some styles so distinct they were obviously the work of a particular carver. Also among the stones were some with a design I'd not heard of, a rising sun. If, as Ludwig states in his work, Graven Images: New England Stonecarving and its Symbols, 1650-1815

the Puritans choose designs that communicated to the living, their idea of 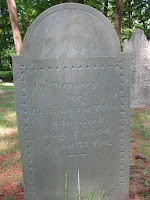 death and the afterlife than what were the folks with the rising sun stones trying to say? The message of the Death's Heads is obvious, things are pretty bleak over on this side. Likewise, the appearance of wings alongside the head, and a happy face, reflects the Puritan's happily evolving view of afterlife. The willow and urn complete the cycle. Things are now in a restful state, quiet, contained.

But how does the rising sun fit within this? Were these 'rebel' Puritans who believed in, dare I say, the resurrection? Were these people even Puritans? Were they, with their beliefs etched into immortal stone alongside the other downers, trying to show their differences of opinion? 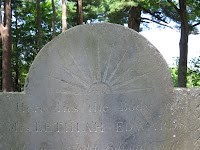 something to wonder about. Most of the houses, as well as the farms these folks built are long gone, but they left their gravestones behind to tell us something. Cycling along winding roads I've got to wonder what it is.

BTW, there is an actual book entitled The Puritan Way of Death: A Study in Religion, Culture, and Social Change (Galaxy Books)

and I highly recommend it!
Posted by Kelly at 8:24 PM No comments:

Round trip to Newburyport via Plum Island

Amidst all this pontificating I have been riding. Honestly, I swear. On Saturday we did the following 56 mile ride out to Plum Island and then to Newburyport for lunch.

The ride was good except through Ipswich, a town where apparently, they have decided never to pave their roads ever again. Cool stuff along the way included a "No Evacuation Possible" sign on the way out to Plum Island, a 18th century cemetery, and a statue of a man completely covered in muscles, muscle shells that is.
Posted by Kelly at 7:47 PM No comments: 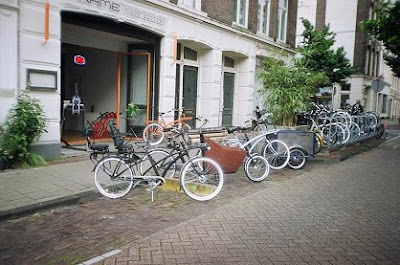 Must one choose between being a road-racing type cyclist and being a more utilitarian, but still bike loving commuter type cyclist?

I ask because the feedback I'm getting on my last post as well as the very book that inspired the last post have me wondering. Jeff Mapes, author of said book certainly put in more than a few digs toward the "Lycra-cladded elite riding cyclist with bikes that cost more than my car". And on the other hand, a friend of a friend read my last post on urban cycling and recommended that I check out Rivendell Bicycle Works. A really cool San Francisco area bike shop seeking "to offer an alternative to racing-centric bikes and parts, and to espouse a different approach to riding." An approach that, reading through the pages on frames, components, clothes, etc. champions a less complicated bike with less stuff to go along with it.

Aside from their unmitigated love of wool as the ultimate in outdoor clothing material (because you can take the girl out of EMS but you can't take the EMS out of the girl - except where smartwool is concerned) they have some great ideas on riding. 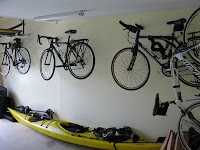 Ideas I whole-heartedly agree with. Ideas that make me yearn for Holland's magnificent bike culture. But I also like my lyrca, my carbon-fiber bike, and clipless pedals.

So I wonder, must this be an either-or proposition? Can't a Cyclist appreciate both or even all types of cycling? Is there not a time for hammering down the road, lyrca covered, pedals clipped, shimano ultegras seamlessly shifting, going no where but faster? (Preferable in the cool of the morning, on a freshly paved, traffic-free road) and also a time to load up the panniers for a relaxed-hair-blowing-in-the-breeze spin downtown to the store, friend's house or even work, uncomplicated by special clothes, fossil fuel consumption and heavy steel?
Posted by Kelly at 6:22 PM 2 comments:

The largest chunk of public land in most urban areas is taken up by roads and parking spaces. Billions of acres and public dollars are spent adding to and maintaining that piece of the transportation infrastructure while only a few million goes to alternatives. Alternatives such as biking that yield a much higher return for each dollar spent not only in people-moving effectiveness, but also in increased heath care savings, lower pollution production and smaller global impacts.

If you're into cycling, not just recreationally, but also as a means of getting around and because it makes more sense than a car-centric culture, then I'd recommend reading Pedaling Revolution: How Cyclists Are Changing American Cities

Yeah, I know, I don't live in a city but I do live somewhere where biking for utilitarian reasons makes a lot of sense and where, since reading this book, I've seen how just little changes in the way transportation funding is spent that could make bikes a whole lot more attractive as a means to get around. Take for instance the beautification project in Pawcatuck. They spent a lot of money to add brickwork to the sidewalks and in the process narrowed the road forcing bikers out into a busy and confusing traffic pattern. While, they could have, with just a little thought, made a very safe, and pretty, way for cars, bikers and pedestrians to get through town.

And speaking of cars, the more you look at them, the more you really 'see' what impact they have on our county, especially as compared to the elegant simple machine that is the bike, the

more pissed off I get. Come on folks, stop driving to your mailbox, stop accepting a 50 minute commute as normal, stop going to the gym. Live an active life. Bike, walk, rip up concrete with your bare hands, turn in your clunker - use the cash to buy a bike. (Oh just imagine that bike! For $4000 you'd have the top of the line - not a downpayment on 5 more years of debt)

Photograph of bicycles at UC Davis taken by Ansel Adams in 1966. Photo view is due south from intersection of Shields Avenue and East Quad Road and showing the Wright Hall in the background.
Posted by Kelly at 6:08 AM 1 comment: