The Next Big Adventure

Aside from a backpacking trip to NH this weekend - this -

is the next adventure.
Posted by Kelly at 3:06 PM No comments:

The National, Modest Mouse and R.E.M.

When I was a kid I actually wondered what kind of music the kids would be listening to when I was an adult. Would I hate and fear it the way my parent's generation hated our music? (Yup, I was seriously that strange.)

Last night the question was definitely answered. Not only do I love the "kids" music, but they have moved music into new and more expansive territory.

The headliner for the concert was R.E.M. Michael Stipe, 3 guitars and a drummer. Nice vocals, thoughtful lyrics, good beat...you've heard R.E.M. That's what it sounded like.

But it was the 2 opening bands that really made the show.

The National is a Brooklyn-based indie rock band formed in 1999, by friends from Cincinnati, Ohio. There are at least 9 people in the band playing everything from traditional guitar to violin, trumpet, trombone, and I believe a basson (certainly it was from the oboe family). The sound was rich, complex and powerful.

And speaking of powerful, with two drummers backing up some serious guitar, not to mention an electric banjo. Modest Mouse was a driving powerhouse. Seriously, and electric banjo.

If at first you don't suceed...

yea, yea, yea. Obviously who ever came up with that one hasn't tried to learn kayak rolling. I've tried a couple times now, I've even got the steps down. Funny thing - the minute, or rather second, I'm upside in the kayak I do the same, wrong thing! At least now I know what that is.

But lets go back to Friday night... I drove up to Whitinsville, Mass to the Community Center for a kayaking skills class in their pool. The class is run by Eastern Mountain Sports (a direct competitor to ACO!) The instructors, Mark and Steve were both funny and knowledgeable. There were 6 people in the class. Two guys who were very good at rolling, and 4 of "us", so after going over the basics they split the group up. The 4 of us, they took through all the steps from a wet exit to the roll. I did a very leisurely wet exit, and that alone was worth it. (These boats had tiny, tiny cockpits). Then we moved through the set up, the finish, and "all the stuff in between". I learned that a "hip snap" is more of a knee thrust and how to position the blade so it doesn't slice. Then it was time to do the full roll.

I rolled over and did exactly what I did last summer! Body memory is incredibly strong. The good news is Mark and Steve told me what I was doing...I am paddling. Yup, roll me over in a boat and I try (actually succeed) in paddling upside down in a kayak. And they say I'm not talented!

So...I will try again...and this time I'll try to bring the gosh darn paddle over the bow.

How its supposed to go: 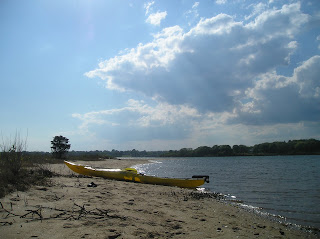 Sometimes the nicest adventures are just a state away. While many people have often mentioned how nice the salt water ponds of Rhode Island are it wasn't until today that I began exploring them.

According to the Salt Pond Coalition, "The salt ponds are a string of coastal lagoon estuaries formed after the recession of the glaciers 12,000 years ago. Piled sediment called glacial till formed the rocky ridge, or moraine, running along what is today Route 1. Irregularities along the coastline were formed by the deposit of the glaciers, which formed peninsular shaped outcroppings, which are now known as Point Judith, Matunuck, Green Hill, Charlestown Beach, Quonochontaug, Weekapaug, and Misquamicut. "

First up was Quonochontaug Pond, located in Charlestown. What a cool place! The wind was really blowing from the West so I headed in that direction battling the headwind while thinking of the great ride I'd have back. The water was very clear and much of the bottom was sand. There weren't many fish but lots of horsecrabs do some really wierd things. Then it dawned on me, were they mating? Sure enough this is what it looked like:


Anyway. There were also lots of great places to beach the kayak. Much of the shore is owned by the state, and lots of amazing houses to look at as well. Also fun was watching the powerboats trying to go out the breachway which opens to the Atlantic Ocean. The tide was pouring in and the power boats just couldn't make any headway. One even got caught in the current and pushing on to the sand.

There were a few other kayakers, one couple came from Massachusetts. They come back often and suggested I explore the Eastern end of the pond next...and I will. Ah, so many ponds, so little time.
Posted by Kelly at 7:56 PM No comments: