(co-authored and edited by S.D.)


This year we were prepared. We weren't going to live through weeks of sticky kitchen, like we had last time...and we were going to get honey! We didn't know how much, but the hive box was heavy so we knew we'd get something. To avoid the sticky mess, we had plastic layed out on the chairs and table. We had every possible utensil we'd need for honey extraction on the counter, and we had the counters clears of everything else. The coffee pot, the knife rack, the dish rack, the toaster, the big yellow fruit bowl were all moved into the living room. In hopes of a big harvest we had bought a bee extruder, honey extractor, sieves , a collector bucket, a capping knife (and we borrowed an electric capping knife) and 24 1/2 pound, and 24 pound honey containers.

To get started with the harvest, we placed the three foot high honey extractor on the plastic sheet by the sink, grabbed a dish towel, wet it and then rang it out. S.D. put on the bee suit. It was time to see just how much honey we would harvest after two years of bee keeping.

Getting the frames
We put the bee extruder on the hive between the honey super and the bees and left it for two days.  This allows the bees to go back down to the main body where the queen lives but not back into the honey super. Getting the honey super off the hive was relatively easy.  This way the bees didn't object when we removed the super and although it was heavy we only had to move it a few hundred feet to the back deck. There we removed two frames, shook off the ten or so persistent bees, covered the remaining frames with the damp towel to keep other bees from coming to the frames and brought the removed frames and one persistent bee into the house.

Uncapping
Once we had the frames, lovely smelling and heavy with combs full of honey, the next step is to remove the capings off the top of the comb so the honey can flow out. Removing just the cap, the very thin wax cover, of the comb, and not the comb itself is tricky business. We had borrowed an electric capping knife made just for this purpose. Once plugged in, the knife heats to the ideal temperature to simultaneously heat and slice through the wax. It worked okay. So long as we removed the building wax hunk off regularly and S.D. used a lot of pressure. The wax cappings went into a big metal bowl and the honey started dripping. Meanwhile, the bee who snuck in started buzzing angrily overhead and a few more showed up on the outsides of the window screen.   We ended up with a nice chunk of wax after it was filtered, enough to make a few candles.

Spinning Out the Honey 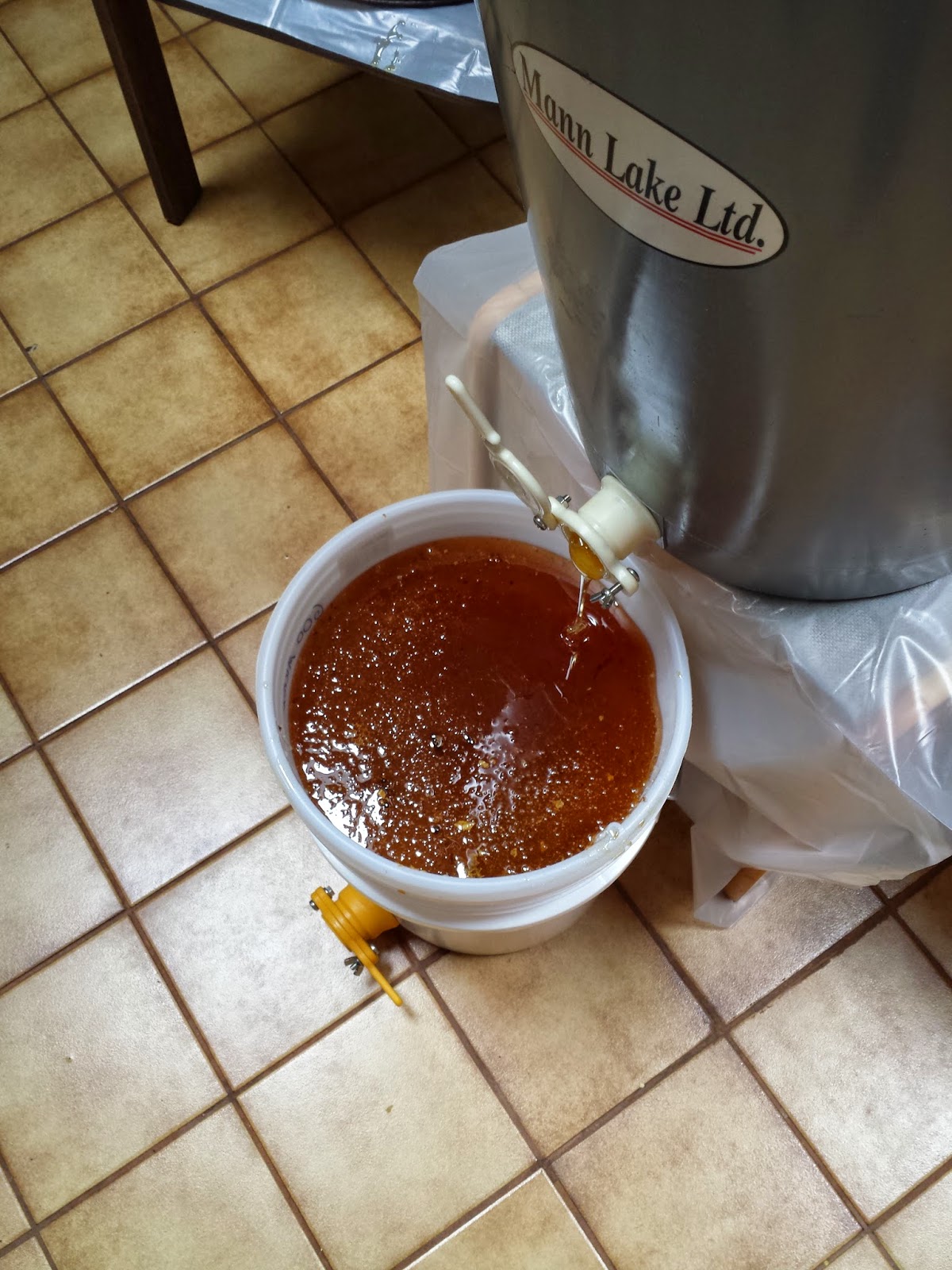 Once the cappings were off both sides of each frame we loaded the frames into the honey spinner. This was the three foot high bucket with a closable spout at the bottom, two racks on the inside, and a handle on the outside. Once loaded, we placed the lid on top. Grabbed the turning handle on the side and started cranking the handle, thereby spinning the frames inside the bucket and causing the honey to fly out of the combs hit the inside bucket walls and flow to the bottom.

Our Honey Flow
After repeating the process for 4 frames we noticed that the honey at the bottom of the bucket was starting to reach the spinners. It was time to open the spout and start filling the collector bucket running it through the sieves. The into the honey containers from there. And boy did the honey flow. By the time we'd finished all 12 frames, we'd filled all the bottles we'd prepared and even had to find a few jelly jars to fill too!   In the end we figure we got about 30 pounds of honey.  All of our friends, family and neighbors we gave a sample to, and the 15 pounds we sold to co-workers,  loved it and said how much better it was than store bought.  We figured out a quick estimate of how much each pound of honey cost us, it wasn't pretty, but then this is a hobby and not cost effective in any way.

Clean Up
Fortunately the plastic wasn't needed, it wasn't nearly as messy as we feared.  Clean up of all the gear was easy, we let the bees do it!  The frames went into the super and back on the hive to let the bees clean them up.  The extractor, sieves and bucket all went out to the back yard and every bee in the area helped clean them up.  In the end all we had to do was give them a quick wash and the clean up was done.

Graduation
After two years, 5 queens, 3 bee packages, 1 nuc, we had a kitchen full of lovely honey. Even more impressive, we'd finally gone through the full cycle of a bee keepers years - we were bee keepers!
Posted by Kelly at 8:10 AM No comments: