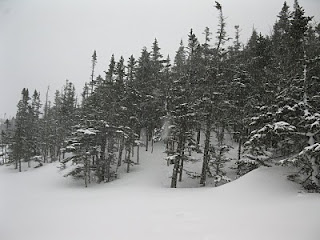 Funny what with all the winter hiking we did this year the first time we had to break trail was on April 1, on one of herdiest of herd paths in the White Mountains. We had taken Friday off from work and weren't about to change our plans to hike Carter Dome and the Wildcats over the long weekend. No mere freak of an April storm could stop us.

Of course 10 to 12 inches of snow did slow us down. And apparently a lot of other folks rethought their plans. The only people we met on the 19 Mile Brook Trail were the hut caretakers – coming down. So the going was a little slow, extremely beautiful, but slow.

We made the hut however in good time, had lunch, selected our bunks (thinking we'd have company) and then started up to Carter Dome. Walking up a 60 degree, ice slope, with 12 inches of snow covering, is really challenging. Even with the snowshoe elevators fully extended, small steps, and taking care that the prongs really dug into the ice we'd advance only a few steps before falling back one, and setting off tiny avalanches. 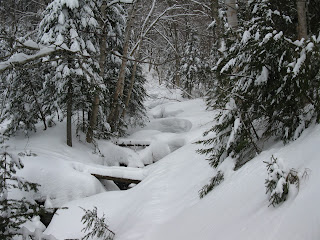 Meanwhile, as we passed Pulpit Rock – the snow was getting heavier, and as is usual, the higher we got, the windier it got. What with the trail blazes being at snow level, the already alpine-stunted trees barely tipping out over the snow, and the snow whirling around us, I lost the trail. I think we were really close to the summit, but considering we couldn't see the trail, or 1 foot in front of us, we can't be sure.

Playing it safe, we turned around, avalanched down the trail, returned to the bunkhouse, stripped out of our cold, now wet clothing and climbed into our sleeping bags to await the appearance of the caretaker, and the promised 4:00 fire.

Luckily, the temperature was only 28 degrees. The Huts aren't heated, but they are tight which was good as the wind was really starting to pick up now, even in the relatively protected notch.
Posted by Kelly at 6:56 PM No comments: