The Tripyramids: When is a trail not a trail? 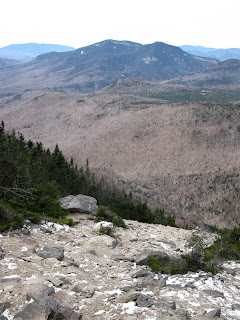 It was Thanksgiving Day morning and I was plastered to the side of North Tripyramid. Sure I'd read the guide book carefully noting that the trail climbed up a rock slide, covered 1200ft in .5 miles and was "difficult and dangerous in wet or icy conditions" where "ice may form early in fall" . And yes I certainly knew I had problems with heights. But still, there I was half way up a trail that was really a vertical rock slab and very close to freaking out. S.D was urging me to admire the view, all I could look at was the ice-covered granite 6 inches from my nose.

It took a while, some careful guiding by S.D. and many small steps but eventually we reached the cairn at the top and gratefully plunged back into the safety of the pines.
The rest of the hike was nice. We enjoyed a peanut butter and jelly sandwich Thanksgiving feast on the North summit, then hiked along the ridge to the Middle and South summits.  Descending via the loosely graveled South slide was anti-climatic, and I thoroughly enjoyed the view to the South, over the lakes region.We completed the 11 mile loop in good time and went home to cross two more of the 4000fters off the list.
Posted by Kelly at 6:55 AM 2 comments:

Mt. Moosilauke: The 4000fters and the gearheads who climb them in snow 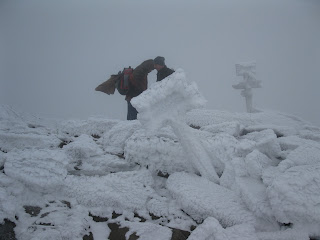 It was a sunny, warm, 50 degree day back in Manchester, MA. At least that what my friends tell me. It's a little hard to believe considering that we less than 140 miles North, 4800ft. higher and in a blizzard.We were on the summit of Mt. Moosilauke, wearing every piece of clothing we had (and still cold), leaning into the 40 knot wind (and still getting knocked down).

There were no views, except of rhyme ice-covered, unreadable signs and the stone wall remnants from the Prospect/Tip-Top House, a popular Victorian-era summit motel but we were very happy to be there. As were the two other guys who summitted at the same time and the 8 other people we met on the way down.

It takes a special kind of hiker to be out in bad weather, climbing bald mountains on view-less days. I imagine we all shared the love of the outdoors, the challenge of the climb and a bit of obsessiveness. However, we didn't (and often don't), share an idea of what type of gear was required, and winter climbing seems to bring out a breed of gear-obsessive hikers that we'd not experienced before. With our down sweaters, techwick underwear, fleece gloves, wool hats, hiking boots we felt plenty warm. For gear we had our hiking poles, and if the trail had proved icy enough, (which it didn't) we also had microspikes

. If we'd been delayed until dark we had headlamps. The idea being to carry a little more than you need but not so much that you weigh/slow yourself down. 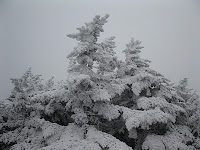 The guys we summitted with shared our philosophy. They traveled fast (actually overtaking us 200 ft below the peak), dressed warmly and carried moderate-sized packs that presumably held the few items necessary for more extreme conditions.

The hikers we met while descending (they still heading for the exposed summit) all seemed of a different breed. The first couple, whom we met on the old Carriage Road trail between South peak and the summit, were struggling upwards with large backpacks and wearing their microspikes.  Microspikes are great for walking on ice, but there were only scattered patches of ice on the trail, and less than an inch of snow. We assumed that they assumed the summit was icer but when we told them the summit was icy but the trail was snow, they gave us a dismissive hand wave and trudged on. 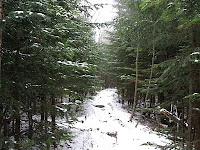 Further down the Carriage Road (and trails named Carriage Road are wide, relatively flat, and once were traveled by horse and carriage) we came around a bend to find a lone woman standing in the middle of the trail. From a distance her enormous backpack was obvious, from closer it was clear that she was dressed for a full alpine assault. Snow parka and pants, over gloves, full gaiters and microspikes. Just as I came close enough to say hi, her hiking partner came around the bend.  The guy was seriously out of breath and just as seriously outfitted.  Assuming from the size of their packs that they had overnight gear I asked where they were headed. They looked at me like I had two heads. They were only going to the summit! The guy looked at our gear, obviously noting the daypacks, the lack of gaiters and the bare, microspikeless boots and commented that "at least we weren't wearing cotton pants" caught his breath and laboriously headed up the Road. Later S.D. told me the he saw an ice axe strapped to the guy's pack.

For the rest of the descent I couldn't help but notice their tracks, the distinct double-diamond impressions made by microspikes, as they wore them for 3 miles over ice-less, slightly snowy trail and wonder why? Why gaiters when there was no snow? Why micospikes when there was no ice? Why an ice axe when there was, and never would be, a reason for an ice axe on this trail? And what could have possibly been in those enormous packs?
Posted by Kelly at 8:38 AM No comments: 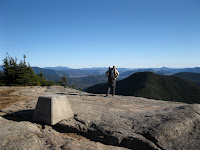 Back in North Stonington, on the Connecticut/Rhode Island border, there is a trail to a high, large flat rock. Often I'd hike out that way and stop to practice yoga. While hiking all over New England I come across other inspirational spots. Open expansive areas that seem just perfect for sun salutations, tree poses, or a flow through the warrior posses. Often, while doing yoga videos I wonder why they choose to shoot in a stale empty room when they could have filmed out here, in the woods, grounding to the earth through a giant granite outcropping ribbed with quartz as opposed to cold, dull concrete.

But last Friday, I was thinking of none of that. It was sunny, warm and the sky was a deep blue. We started off from the Tripoli Rd. trailhead at 7:30 (just the time I'd usually be arriving at North Station) and quickly began climbing the 3.2 mile, 2300' elevation gain to the summit of Mt. Osceola. It's a great hike. There are plenty of views off to the East and while I did slide once crossing the ice on the rock faces above 3000ft the trail was pretty easy going. We arrived at the summit in a little over 2 hours.
And there on the summit, actually just a little below and to the North of the summit is a big, flat granite expanse open to splendid views to the East. A 180 degree panorama of forested peaks, deep green valleys, bald, glittering lakes and snow covered mountains. All beneath the clearest of blue skies - is The Perfect Yoga Spot. It's a setting that Rodney Yee 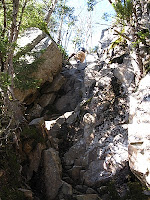 We marveled for a few minutes then continued on the trail to East Osceola, another peak, a mile away over a much different, more challenging trail that included the infamous 'chimney' (a vertical 300 ft. climb/drop). East Osceola's summit was marked by a small cairn in the woods at which point we turned around and headed back to Osceola where we ate lunch and did a little yoga. Namaste.
Posted by Kelly at 10:46 AM No comments: 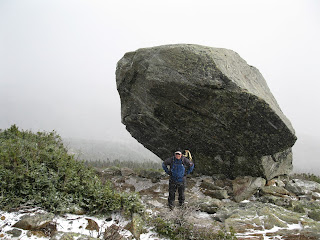 It wasn't so much the snow blowing by at 30 mph as it was the ice hanging off the rock face that was intimidating. That, and the fact that if you were inclined to follow the yellow blazes that marked the trail, the realization that the icy rock face was the trail.

For the first 1.5 miles the trail climbed the 2000 ft to Glenn Boulder through forests of tall broad Beech and Hemlock. The snow falling gently, sticking only to the fallen leaves and dark green needles. But that all changed abruptly when we popped out above the treeline. And by abruptly I mean one step. A step up onto the rocks and the wind almost knocked you over as the snow bit into your face. A step back and it was once again a calm, gentle flurry. A step up and the snow fell on the rocks and melted to an icy sheen, a step down and it melted away. 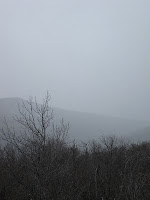 The plan for the day was to hike the Glen Boulder trail to the Davis Trail, then go south, summit Mt. Isolation and head back. A 12 mile round trip that promised good hiking with over two miles of splendid views above treeline. The weather however, changed all that. With blowing snow, there would be no splendid views, and the time above treeline would be more than we'd planned for when setting out on a late fall hike.

So we hiked up to Glen Boulder, marveled at the snow building over the ridge from the direction of Mount Washington, took a few photos, debated the need for the microspikes, and headed down. I might be game for winter hiking, but I'm not quite ready for icy blizzard hiking.
Posted by Kelly at 9:03 PM No comments: