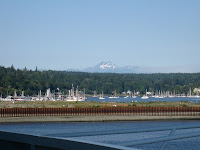 After the second brilliant sunny day of this trip and the 8th consecutive sunny Seattle day, I'm beginning to suspect that all those continuous rain stories about the Pacific Northwest are told in order to keep Californians and Easterners away. Another thing that would be attractive, if you knew, and they've never mentioned, are the blackberries. You know those rather largish black berry bundles that grocery stores sell in tiny pints for $3.99? Those same berries, or rather, a more luscious, ripe, version of those berries grown EVERYWHERE in the Pacific Northwest.

I first noticed them, with the total disbelief of a blackberry deprived Northeasterners, as we were riding our bikes just outside of Bainbridge. We'd taken the 9:20 ferry, arrived just a little before 10:00, rented some horrendous rental bikes (I now get why some people don't like to ride bikes, I wouldn't either if this way my experience) and immediately pedalled out to circumnavigate the island. After grinding through 6 gears and 2 chain rings up a hill, we were speeding down when I noticed that all those bushes crowding the side of the road were overflowing with blackberries. I braked. SD swore, almost ran into me, and narrowly avoided another broken collarbone which may be the reason he was not as impressed as I was. There were blackberries everywhere.

At least they sure looked like blackberries, but what were blackberries doing on the side of the road? Unpicked by humans, untouched by birds, unnibbled by rodents? I glanced up the road to see if anyone was watching, any cars approaching. The coast was clear so I picked and ate one. At this point I was expecting that perhaps they just looked like blackberries but were infact some insidiously disguised poison fruit. But oooh, they tasted like black juicy sweetness itself. I picked another and handed it to SD, hoping it would justify his close encounter with 3 months of intense shoulder pain. I'm not sure it did, but he did smile. We ate some more, me still glancing furtively around wondering when some angry farmer would appear waving a shot gun, and then we rode off.

Up over the next hill there were more roadside berries, and up the next hill, and down the other. (In addition to berries there were an unexpected number of hills on this island!) Sometimes the bushes looked so ripe and full I tried, but just could not pedal by. SD was now riding a good 100 ft behind me so when I cried “Berry Break!” he would have enough braking distance. At one patch I was literally surrounded by blackberries, so many berries, so little hunger.

Talking about this later with Pacific Northwesterners, transplants, and other visitors, I learned this first encounter with blackberries was typical. That they are in fact so plentiful as to be considered an invasive weed. The bushes are everywhere, in highway medians, on the side of the LinkRail tracks, in vacant warehouse lots, in parks, everywhere.

Strangely enough, they still sell in Seattle grocery stores for $3.99 pint.
Posted by Kelly at 8:35 AM No comments:

Ever since I was a kid I wanted to be a farmer. But being raised in a coastal fishing village, farming seemed remote, exotic and impossible. Little did I know, I could have been a fish or seafood farmer (there presently is a oyster farm in Noank) . Aquaculture in the United States is amazing.  While its image suffers from the bad rap it gets from foreign raised salmon, US grown fish thrive in open, healthy, sustainable 'farms.'  Farms that I'd be happy to live on. While America romances the Family Farm of the midwest, with its rolling fields of amber waves,  I've seen the beauty of the Peuget Sound waves rolling beneath Mt. Baker and douglas fir lined shores.

And then there are shell fish farms. From Anacortes we drove about 20 miles south to the Penn Cove Shellfish Farm and toured the mussel farm.  The mussel are grown on 30 ft lines hanging from a series of rafts.  Apparently, the harbor seals consider this their personal day spa. Even as we rode by them close enough to almost touch the raft, they merely glanced our way and went on sun bathing. There's an amazing amount of work that goes into profitably growing and harvesting mussels. The day we were there wasn't a harvest day but there were still two crews hard at work. One 'socking' the young mussels onto their lines and the other gathering spat.

The only proper way to end a day of watching people grow food, is, of course, to consume that food. Coincidentally, just down the road from Penn Cove, in the town on Coupeville, is Toby's Tavern,  the perfect place for mussels and beer.
Posted by Kelly at 7:19 PM No comments:

There just might be something to this river paddling. While the boats need to be a bit shorter, and you have to contend with  more bugs, incessant turning, and submerged logs, you never have to wonder if the tide is going to turn on you and leave with all your water.  In fact, if you start up river and paddle down, you're guaranteed to have more water the longer you paddle. And, the big bonus - you really don't even have to paddle, the current just floats you along. The run between Thunder Bridge in Topsfield, Ma and the take out in Ipswich is probably 9 miles, and it only took an extremely leisurely 4 hours.

The river, roughly splits into three different areas, although throughout the entire length it meanders continuously bringing you, after half a mile of paddling, just a few feet east of where you used to be.

The first section of the run however, from the put in to the Audubon Society land, reminded me of paddling in Ocala National Forest. It was about as much like the Everglades as you can get in New England. Lots of vines, cardinal flowers, clear water over sandy bottoms, submerged logs and people, in the middle of no-where, bathing. (Not swimming, but lathered up with soap and bathing).There was a blue heron who proceeded me for about an hour, flying down river, or across to the next oxbow until I paddle up, when he would take off, and move on down.

The second section was through the Audubon Society land. More meanders, but through a very open marsh. Very few trees, and very little dry land. It was a sunny day, one of those sunny days where you pray for a cloud, any cloud and paddling through an open marsh provided no relief. The turtles however, were not complaining and they were everywhere basking on the logs they were pretending to be.

The third section, was the shortest. From Bradley Palmer State Park to the take out, the Ipswich River runs through a more forested section with willows and other trees over hanging the banks, and lilies in the water. In some places there were also grape vines, and some of those vines had juicy bunches of Concord Grapes! It's been a long, long time since I've picked a ripe bunch of Concord Grapes off a vine and eaten them. And oh, they were good!! The kayaking was great too. The river was just woshing along, and while the grapes were good, I was getting hungry. It was that time of the paddle when you starting thinking about food and beer. And that's just when the take-out appeared around the bend.