Pagan Paul, the Promise-Keepers and Me

Recent events in North Carolina have had me thinking back to an earlier, pre-blog hike, one in which prejudice was met with a shocking blow, and one which definitely deserves a place in internet history. 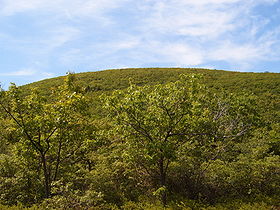 Paul and I were section hiking the AT North-bound through Connecticut in 2001. On our third day, just as the funk was starting to settle into our clothes, (I had yet to learn the wonders of Tech-wick), and we were looking a bit wild, we came to a junction with a feeder trail where a man stood, clearly looking puzzled. He was in his mid 50's, buzz cut hair and dressed in crisp khaki shorts and a denim short sleeve shirt. Paul and I,  said "hi' and the man replied - was it my imagination or did he just reply to Paul? He then distinctly asked Paul, the guy with long black hair tied back with a bright red bandana, a sweaty black shirt with a hemp-leaf design,  and in my opinion - the wilder looking one of us, if he had seen a group of "younger folks"? and if he knew which trail led to the top of Bear Mountain.

Paul replied that we hadn't seen anyone else so far that day, and that this trail, the one we were on with the white blazes would take you to the summit. The man still seemed unsure so I  dug the my map out of my backpack and showed him. The man, never making eye contact or responding to me, asked Paul if this was correct.

As Paul and I set off down the trail, I couldn't help but ask if he thought that was weird, it was like I didn't exist and Paul agreed. "Did you notice the patch on his shirt?" he asked. "It said - Promise-Keepers".

"Seriously?" Incredulously, I replied."That explains a lot." The Promise-Keepers, are a "Christian evangelical ministry dedicated to uniting men to become godly influences" who believe among other things  that women as the vehicle for evil on earth, are second class citizens, and as I had just experienced - aren't the least bit shy about acting like it.

Paul and I then spent the next hour while hiking up to the summit discussing various religious practices, ending with him telling me about the pagan ceremony (Paul being a practicing Pagan) in which a man becomes a warlock. We were pretty close to the summit, the day had become very hot and Paul had taken off his shirt, and I'd stripped down to tank-top and shorts and the trail was a single-track through bushy trees forcing us to walk single-file and for Paul to have to talk very loudly so I could hear him, even from behind.

He had just finished describing the Warlock Imitation Ceremony, how under a full-moon, the coven dances naked and the warlock submits to the witches when we came out into the summit clearing - a clearing entirely full of young male, spit-polished Promise-Keepers, staring at us - the almost naked -Pagan Warlock and Woman.  We smiled, said hi, and walked on. They remained frozen, impotent, in the presence of pure evil.
Posted by Kelly at 8:54 AM No comments: 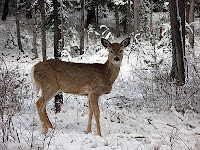 Now that I know they are up there on the hill behind the house, I can feel them looking down. Watching, waiting, patiently. Someday, someone will walk back up the hill and this time they won't stare at them, watch them from behind the rhododendrons, and then follow in their snowshoe tracks. No, next time those carnivorous deer will stalk that walker and take them down.

I first learned of the stalker deer innocently enough. After waiting 30 minutes on a snowy morning for a train that never came I decided to call it a day and go snowshoeing. The roads being impassable, the only place to go was up the trail onto the town land behind the house. I've walked up to the Powder House, and written about it before. It's a nice little walk up to a point of land over looking Manchester. But on this morning as I was fluffing through the 12 inches of fresh powder on the trail I suddenly felt eyes on me and looking up saw a herd of deer gathered around the Powder House. Awww. How beautiful, and how lucky I was to see them before they ran off. I slowly walked forward hoping to get closer but knowing that at any moment they'd bolt. But they didn't. In fact the biggest one actually stepped toward me. He was big. I stopped. He took another step. I took a step. He took a step. This was weird. I waved my arms and the herd ran off, He waited a minute, and then left.

Thinking that was that, I kept on down the trail, taking the loop North. And there they were again – on the trail, the whole herd staring at me. The big guy out front challenging me. I kept on walking and they slowly faded into the woods as I continued on the trail.

A little ways down the trail I heard a noise behind me, and there they were again. This time they were single file, big guy in the lead, following me, in the snowshoe track path. Well, I guess if you have to have stalkers, a whole herd of them, they might as well be deer. But the big guy was Big, and it was all just a bit too much for me.

I understand they were probably hungry, probably had been fed by people before, and undoubtedly, walking in the track was easier on their spindly little legs than taking on the 12 powder, still, whenever I look up at that hill, I know they are there, and I know they are watching.
Posted by Kelly at 6:02 PM No comments: