It's always kinda nice when after a  great dinner out you can gather around google maps in satellite mode and say "my dinner were farmed from there, and there, and there." And last Saturday after a great day of kayaking we did just that. We'd tried to go Matunuck Oyster Bar during the summer, but the place was packed. On a beautiful autumn evening it was merely busy. 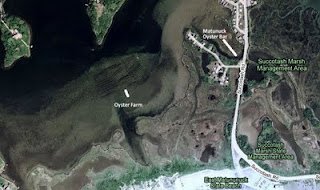 The entrees were good but really, the coolest thing about the Oyster Bar are, well, the oysters. We ordered a plate of assorted Rhode Island Oysters. All named after their locations. The Potters Pond oysters were the sweetest (and incidentally grown by the owner of the restaurant). On google maps you can actually see the cages. In the summer they run tours out to the farm. Next we had them from farms in Winnapaug Pond, Narragansett Bay, Point Judith Pond, and Ninigret Pond. All good. Actually all very good!!! Can't wait to go again. mmmmm...maybe in November?
Posted by Kelly at 10:16 AM No comments:

HMS Gaspée, a British revenue schooner that had been enforcing unpopular trade regulations, ran aground in shallow water on June 9, 1772, near what is now known as Gaspee Point in the city of Warwick, Rhode Island, while chasing the packet boat Hannah. In a notorious act of defiance, American patriots led by Abraham Whipple and John Brown, attacked, boarded, looted, and torched the ship. By many accounts, this is actually the first act of the American Revolution.

If you live in Warwick, RI, this is the raison d'ete for Gaspee Days, a three day craft fair, party and parade.

For me, it lead to a moment of living history. Saturday some friends and I went kayaking in Narragansett Bay. First we headed North up the Pawtuxet River, then South around a very long sand spit. As we rounded the point Steve pointed out that this was Gaspee Point. 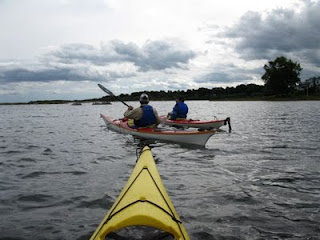 I work in a museum but I'm not really the kind of person who gets excited by the whole 'true cross' thing. Looking at Washington's wooden teeth is gross, staring at the hat Lincoln wore the night he was shot is just morbid, even a splinter for The Cross really wouldn't faze me. But doing something, or being somewhere, where something historical happened - just gives me the shivers. So there I was, paddling over the very spot where the Gaspee grounded and burned more than 300 years ago. The wind was blowing, the temperature was dropping and I was loving it. I paddled as close to the land as I could, half hoping I too would run aground.
Posted by Kelly at 8:44 PM No comments:

The Flatest Century in the East, 2009

Even though I rode a Century, a hundred mile ride in one day, apparently, I'm a slacker because I haven't written about it. Which alters the question of whether life imitates art - or informs it.

Doing the Century this year was touch and go on four separate occasions:
Knowing we were getting a bit older we had been training all summer for this ride. Along with regular rides we'd also done the Erie Ride for a warm up, and the Vermont week for the final big training week. But we hadn't ridden the week between Vermont and the Century and then some friends invited us to spend the weekend on their island. We knew we could ride the 100 miles. We'd ridden 80 hilly miles just the weekend before so we wondered, do we really need to do the actual ride? and if so for whose sake? Why do we set these goals and who cares if we achieve them - technically?

Philosophical musings aside, the morning of the Century found our friends enjoying a nice cup of coffee and watching the sunrise over Narragansett Bay as we pulled into the Dartmouth parking lot with 3000 other bike riders whom we soon followed North to begin circumnavigating the Southeast Mass coastline. The riding, while not flat, was nice, traffic low, and the Narragansett Bay Wheelman had hired a number of traffic police to see the massive groups across major intersections.

At the first rest stop, the peanut butter sandwiches tasted pretty good. We'd ridden 37 miles and we were feeling okay.  Between there and the next rest stop SD started lagging a bit behind. He probably doesn't remember and will, most likely, make a comment on this post as an anonymous person completely denying this but I know I wasn't peddling very hard and he was. But pedal he did. The next rest stop delievered even more sandwiches and promised a change of scenery. Up until that point we'd been riding North of Dartmouth, mostly through wooded areas. Now we headed South, riding up and down pennisula's with great views of rivers, bays and the ocean. And that was a very good thing. As much as I love riding, sitting in the saddle for over 7 hours, can be a bit boring sometimes so it's always good when there is something interesting to look at.

By mile 75, I was in desperate need of something nice to look at. My bum was a bit sore, my right leg was occasionally cramping and I didn't want to eat, or even see, another peanut butter sandwich. SD, at this point, was raring to go. We'd arrived at a short cut to the finish line which, if we took it, would result in an 82 mile ride. Now the question wasn't why do we (I) need to ride the 100 miles, if I knew I could do it, the question had become, geez, can I ride another 25 miles?  SD waited patiently.

I turned right - opting for the whole monty. Ooooowww. By mile 95 my right leg was permanently cramped. I now suspect it was some sort of mineral depletion but then I just knew that every time I turned the crank it hurt like heck. SD pulled in front and slowed enough for me to draft and that helped greatly. On the last 2 miles he thought it might be better if he rode beside me and offered comforting words, and perhaps some distraction. Lets just say that's not a good tactic with me, but the effort is much appreciated.

At 102 miles, SD pedaling along like a little kid, and me cursing every stroke and whomever threw in the extra 2 miles we returned to the Dartmouth parking lot and picked up our t-shirts.

Yeah - I can still ride a 100 miles but I do hope I never make that a goal. Goals like "riding the coast of California" or "circling the Grand Canyon" or such, would probably be funner. Oooh wait, maybe that's a good goal. Riding for fun!

But I did have fun doing the century, not just the ride but the training. AAARRGGG
Posted by Kelly at 8:42 AM No comments:

The book Traffic: Why We Drive the Way We Do (and What It Says About Us)

aside from just being generally fascinating in what it reveals about our driving habits has some good insights into driver/cyclist dynamics as well. Citing a study by English psychologist Ian Walker, the book points out that car drivers tend to give more slack and be more cautious around cyclist whom they can not predict and whom do not appear to know what they are doing, i.e.

Apparently, the best way to avoid being hit by a car is to not wear a helmet, wear a dress and ride erratically. It's truly a great study that will give readers a whole new perspective on driver/cyclist dynamics.

Will I, however, follow this line of reasoning? Heck no! For what I term the the Bad Bike Rider Corollary Effect.

Corollary is defined as a "proposition that follows from another that has been proved."  As such the above law has been proven. What remains to be seen/studied is how the driver will then treat the next bike rider they come upon, and the next, and the next. Having now ridden in several group rides and followed both good and bad riders, both Lycra-clad and non, I can tell you that the more badly behaving, non-signaling, non-riding to the right bike riders a car has to pass, the less leeway they give and the less cautious they become.  Heck, even I do it.
Posted by Kelly at 5:48 PM No comments:

We are returning to a mob ruled, pre-industrial revolution society! If, as Lawrence W. Levine states in William Shakespeare in America, the first chapter of , Highbrow/Lowbrow: The Emergence of Cultural Hierarchy in America (The William E. Massey Sr. Lectures in the History of American Civilization)

Shakespeare was the most popular playwright in America until the late eighteenth century because his plays reflected the American moral sense and worldview. A popularity that faded as individualism and moral virtue became less and less a rewarded characteristic of industrial man. Then, with the current replacement of the industrial revolution by the technological revolution, we are already beginning to see the resurgence of mass movement, crowd sourcing, twitter-organized protests, etc. balance by a respect for rugged individualism. In a nutshell, we are witnessing the return of the power of the individual to effect change through mass movements. Can the mass market popularity of Shakespeare be far behind?
Posted by Kelly at 6:37 PM No comments: