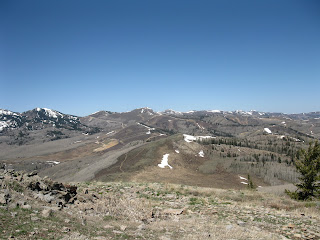 The night after the Lambs Canyon hike I began to wonder if I was crazy? Was I too much of a long-suffering New Englander to appreciate a really nice Ridge Walk when it was right outside my car door as they are in Park City?

In New Hampshire I always lust after the Ridge Walks, those rare, all too short, and hard earned hikes that one is rewarded with after puffing miles uphill, and that are followed by miles of thudding down.


Two nights ago we had driven to an 8000ft high pass and been surrounded by trails that followed the ridges in every direction, and I had scorned them as being too easy, too wide; "bike trails" not meant for hiking, and we'd opted instead to hike the Lambs Canyon Trail, a hike where while the views and fauna were different, the hiking pattern was familiar. Start in a valley, hike up to a ridge, hike down. - but now, the indulgent idea of starting On The Ridge was growing on me. 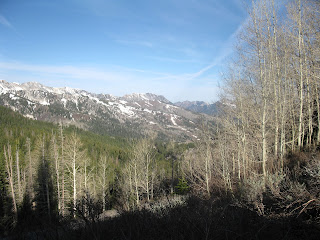 And so, having decided to indulge, we parked at the pass with the plan to hike toward a peak at the end of a ridge extending south. There wasn't a single step where the views weren't amazing.  Snow covered mountains up and to the right, long glistening lakes to the left.  The ground was covered with alpine wildflowers, and snow! Occasionally we'd descend into an Alpine grove, but for the majority of the twelve miles, we hiked along gloriously clear ridge paths.  Hiking in Park City was turning out to be pretty spectacular.