Equipment shakedown - Day 2 From Zeeland Mountain to Guyot basecamp, then out and back to South and North Twin (theoretically) 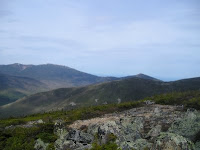 There are 3 key factors in every backpacking trip.

It was on Day 2 that the Equipment factor weighed in. First and foremost there are The Socks. On Day 1 I wore my well worn Smartwool Ombre Crew

Next in importance in the backpacking lineup is The Pack. The right pack carries all your stuff comfortably, is easy to keep organized and accessible, while at the same time weighing as little as possible. My Gregory Z55 Pack Backpack

[the blue one!] fits the bill. It fits the stuff, weighs very little, and is easy to organize. S., on the other hand, is still mid quest for the perfect pack and aft 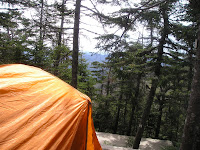 er one day had the sore hips and shoulders to prove it. We hiked from the camp on Zeeland to our basecamp at Mt. Guyot where we set up the MSR Hubba Hubba on a nice platform overlooking the Pemi Valley. The Z55 compressed right down into a manageable day pack which we loaded with a day’s worth of food, and fleeces and took off for South Twin.

This is when the poles became indispensable. The Twinway between Guyot and South Twin runs along a low forested rim. The perfect conditions for creating a 2 mile snow pile or monorail. If it weren’t for the poles we’d 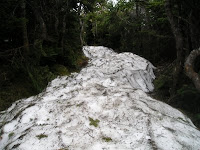 We reached the summit of South Twin around 1:30 and pulled on our cozy fleeces against the cold wind. The view was beautiful. Looking toward North Twin, and looking at the map, then back at the 1.5 mile trail between South and North Twin, then again at the map, I realized I would again, just as I had in July of 2007, have to leave that summit for another day. One thing about good equipment, in this case maps, is that no matter how good they are, you really have to use them.

Back at Base Camp we fired up the pocket rocket, cooked an edible dinner of curry chicken, and before the sun set crawled into our sleeping bags. At 4000 ft, in May, temperatures are bound to fluctuate and on this night they were fluctuating downwards. Quickly. When I crawled into my 45 degree bag I was wearing my techwick tops and bottoms, heavy socks, and heavy fleece. Regardless I soon discovered my bag was failing. The down had clumped and areas of the bag were completely empty. It was going to be a long night. When I did sleep, I dreamed of warm, fluffy synthetic sleeping bags.
Posted by Kelly at 7:40 PM No comments:

A Long Weekend in the Pemigawasett Wilderness 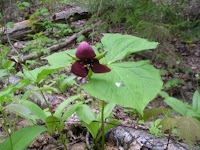 After a long debate on bon bon eating vs. backpacking S. and I choose the later for a long Memorial Day weekend. The only remaining question was - could we survive?

The plan was to circumnavigate the wildernerness, in a counter-wise direction, from Crawford Notch in 5 days. We'd start by climbing the mountains and finish up with some nice easy days in the flats. Sounds good so far.

Then we looked a little closer at the maps and parked Moby at the Zeeland Road trailhead. Substituting some rather tough climbs for an easy 2 miles into Zeeland Hut. There were trilliums along the trail everywhere, both the white and even a few purple. It was lovely. The falls too were magnificent as was the view from Zeeclift. The hike up to Zeeclift was a little tough, but the view was great. Looking out over the Pemigawasett, the very area we'd be hiking in the 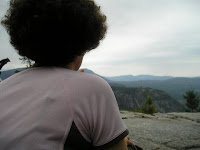 upcoming days was inspiring. The weather too was good. Sunny, and moderately warm. Somewhere in the 50s, I'd guess. Which made the snow so much more unexpected. But there it was right there in the path where the hiker we'd met earlier said it would be. All mounded up into what he so descriptively called a "monorail". Considering that the trail was very narrow and the undergrowth alongside, very thick, there was no choice but to walk, and sometime posthole, over the monorail. 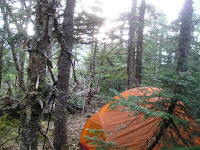 By the time we reached the peak of Zeeland Mountain (another4000fter bagged for S.), we were tired. Although 2 miles short of our intended destination, we pitched the Hubba Hubba, ate a hearty dinner of Backpackers Pantry Cashew Chicken Curry and called it a night. Tomorrow we would establish a base camp at Mt. Guyot, then ascend South and North Twin.
Posted by Kelly at 9:59 AM No comments:

This morning I was tooling along on my bike when I noticed a pair of vise-grips laying in the road. There was still 2/3rds of the commute left and only an hour to get to work and to shower, so I rode on.

But it began to seem strange. Good tools rarely lie around in the road. Last year I'd also seen (and picked up) a pair of vise-grips while riding, and that had been my second found pair. The year before, I'd also rescued a pair off the road. Was this some kind of annual sign. Not superstitious, but not willing to tempt fate, I turned around and picked up this pair too. Were the tools gods telling me something? Was there something I needed to get a grip on?

Come to think of it, I had spent the morning stressing over little things and ignoring the bigger, and better aspects of life. I took a deep breath, changed perspective and pedaled on.

As a great American poet, Robert Frost, once wrote:

The way the vise-grips lay before me
on the Road to Westerly
Made me have a change of mood
and saved a part of a day I'd rued.
Posted by Kelly at 9:00 PM No comments: 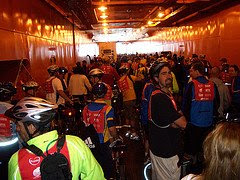 Why, exactly, would someone ride their bike 42 miles through the 5 Boros of New York City in the rain? Why for that matter would 30,000 people do the same, on the same day, at the same time?

Honestly, I can not provide the definitive answer but I have some ideas. Even as we waited in the early morning drizzle for the Staten Island Ferry to take us to Manhattan, and then again, on the Ferry, loaded in the car hold bike-to-bike-rider-to-bike it became more than apparent that this was a special, self-selected group. The bikes ran from "sit up and begs" to hard tail mountain bikes, to finely tuned road racing machines. The people ranged from grandmothers in pumps, to kids in street cloths, to baby boomers in matching cone head adorned helmets. As different as they were, they all shared the notion that this ride was something that needed to be done. 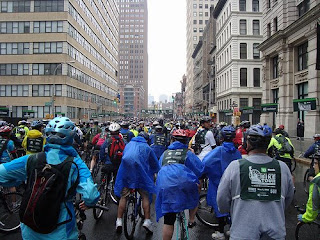 One newspaper account attributed that notion to a sense of fair play stating "runners have the marathon as their chance to take over the city. Bicyclest need their day." But as we waited an hour and half on Broadway just to get to cross the finish line. I couldn't vouch for that. Hopeful riders weren't talking about that, they were mostly telling bike stories, strategizing the upcoming miles, and waiting. Patiently waiting, more patiently waiting than I. To be honest, I almost dropped out after an hour of waiting in the drizzle, knowing the rain was coming, knowing that I would, if I stayed, be riding through city streets, not with cars, but will All These People.

Once we did get going, the ride proceeded at about 5 mph. Riders weaving in an out, passing, stopping, taking pictures, talking with friends. For me, it was physically a very easy ride, but mentally, it was exhausting. One second of inattention and you could skid out in the rain or simply run into a fellow cyclist. There were lots of accidents, some serious. Somewhere in Queens I watched a mountain bike fishtail right in front of roadbike that subsequently went airborn. On the Verrazano bridge the crowd had to slow for a biker on the side of the road. He was under a blanket with a leg extending out at an awkward, unnatural angle. For an idea of what 'riding' involved, take a look at the video shot from some rider's handlebar camera. This was how it was for 5.5 hours.

The route wound all over the city, from Broadway, thru Central Park, down the FDR Highway, over the Queensborough Bridge, over a bunch of other bridges, through Brooklyn, past the Navy Yard, over the Verazzano Bridge and back to Staten Island. Some of the places we rode by were really cool. Places I've always wanted to visit and can now say I have. But honestly, I didn't see much of them, unless you count my knowledge of the road surface.

Reading over various comments made on youtube, flickr and blogs, I'm also not the only one who feels this way, So I have to think that also like me some of the riders were there not necessarily for the ride (honestly there are better ways to get in a good 42 mile ride) but for the experience of riding.

Rain or shine, this is a one-of-a-kind ride. A riding experience that can't be gained anywhere else. Riding a bike, a simple but elegant mode of human powered transportation all around the worlds biggest city. Holding cars and pedestrains at bay for hours even as enthusiastic citizens of that same city cheer on the thousands and thousands of bikers pedaling by in the rain. It's just an incredible experience and one that I and everyone else was able to share with 29,999 other bike riders.

...and as always, made ever more enjoyable by having 1 great riding companion!

*Title supplied by KK!
Posted by Kelly at 8:36 PM No comments: