I can now add 'Kayak Guide' at Essex River Basin Adventures to my alternative resume, right after 'Gear Guide' at Eastern Mountain Sports, which follows 'Boatyard Worker' at Noank Shipyard.  Not bad for a computer geek/librarian!

Kayak guiding is a good gig. While you don't get to talk with customers about all kinds of cool gear like an EMS guide, you do get to take them out on the water in one of the most beautiful estuaries on the East Coast and show them how to paddle a sweet little boat through brilliant marsh land, and share with them the egrets, ospreys, plovers, crabs, fishes, and clams, along with talking with them about the history of Choate/Hog Island and the Crane Wildlife Refuge.

And, as at EMS, one of the best part of the job is the other guides!

If you're ever on the North Shore (the shoreline area North and East of Boston) look me up and we'll get out on the water.
Posted by Kelly at 7:49 PM No comments: 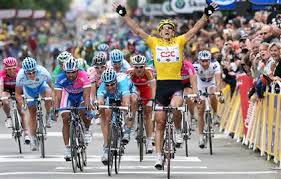 Only one week down and this year's Tour has already inspired a new wannabe-rider scenario. Now in addition to practising my stage winning finishes (hands raised straight up,to the side, or mid-way, or the self-congratulatory chest bump), and the effortless spin through fields of sunflowers/corn/hay, or raising my hand when flatting so the team car can zoom up and replace my tire, stage 9 has given me a whole new scenario.

Now, when being passed by a car on a twisting, narrow road I can pretend that the car is being driven by a thoughtless French newspaper driver who may side-swipe me and throw me into the bordering barbed wire fence ala Johnny Hoogerland.

Really, it is time for every car and motorcycle driver to realize that bicyclist are people. They're flesh, blood, and muscle, and when you hit them with a heavy hunk of moving metal bad things, very bad things are going to happen.
Posted by Kelly at 7:00 AM No comments:

Ode to the Camp Counselor and Kayak Guide

One of the notable things about the other week's hikes was the number of camp groups on the trails. Groups of kids, aged 11-17, originating from some camp somewhere in New Hampshire, out on a day or overnight hike accompanied by one or two young adults,

For many of these counselors, you could tell that running these trips was both a privilege and a challenge. For many of the kids, you could tell this was their first trip into the woods and while they chatted on about Nintendos and facebooks statuses they'd also stop to admire the views, and play in the waterfalls. And even though the camps attempted to match up the skill level and fitness of the kids there were still ones that would go bouncing off the front, and others lagging behind. The Counselors, did a good job of keeping everyone together and keeping the mood up.

On a related note - yesterday a large group of kids went out with the Essex River Basin Guides. It was a beautiful day and while, I can only image what its like to go kayaking with 60 kids, I'm sure the guides made sure they had a great time and were safe, as well.

For many of these kids, this was probably their first experience in the Whites, or on the water, and it was good to know that these important first introductions are handled so well.
Posted by Kelly at 6:37 AM No comments:

12 or 14 miles (depending on which trail you prefer) deep into the White Mountains lies the appropriately named Mt Isolation. One of the shortest, but furthermost from any trail head, of the 4000fters. (Owls Head is 16 - but that's a hike for another day).

We decided to walk in via the Rocky Branch trail this time, having attempted the Glen Boulder trail earlier. Certainly not as scenic, but promising 1000ft less in elevation and the chance to take a dip in the Rocky Branch river if the temps rose to the predicted 80 degrees. The trail rises up immediately off the trail head and continues a steady, but not stair-like climb for the first 1.8 miles before almost leveling off for a 0.9 mile stretch down to the river. Around 1.6 miles we paused to have a staring contest with a moose.  Despite numerous and voluminous evidence that they are everywhere, we've only seen two moose in our hikes. Both times they were just off the trail, behind some brush. Both times they just stood and stared  at us. This time we stared back, S.D. took some pictures, we all stared some more, the moose won and we continued on our hike.

Around 2.1 miles the right side of my right knee seized up. Iliotibial Band Syndrome usually happens to runners but it can happen to anyone, especially folks who "are notoriously weak in their hip and core muscles, particularly if strength training or participation in sports that involve side-to-side movement are lacking." - umm like cycling. And it's happened to me before. Usually on the final mile of a long downhill stretch - not less than a 1/4 of the way up on a 14 mile hike. S.D. whipped out his first aid kit and expertly wrapped my knee. Hoping that a walk on the upcoming flat and the bandage would keep things under control, we continued along. But things didn't improve and as the trail became a stream and hiking became an act of jumping from one rock to another the knee really started tightening up. At the Rocky Branch River the knee and me just snapped. Frustrated by having hiked the hardest part of the trail, even now being able to see Mt. Isolation, but knowing I couldn't reasonably continue on, I gracefully hurdled my hiking poles into the dirt, and let loose with a string of expletives that S.D. will forever tease with me but that at that moment were pretty shocking. 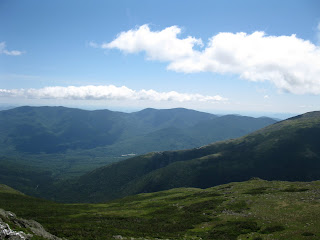 After I finished my little tantrum we turned around, hiked a little, had another peanut butter and jelly sandwich that couldn't be beat, and limped on back to the car. We'd hiked 7 miles, it was a beautiful day, the last day of a great vacation and we still had 5 more 4000fters to go, 5 more easy reasons to return to the White Mountains.
Posted by Kelly at 6:52 AM No comments:

Liberty and Flume : And then there were five 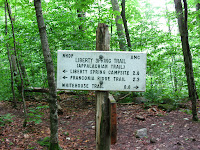 Friday morning was foggy and the forecast called for rain, but since it just can't be a hiking vacation unless you climb in the rain we went ahead with our plan to take the Liberty Spring trail up to Mts. Liberty and Flume. And it's a nice trail, provided you don't mind walking up stairs for 1.6 miles and 3000 ft.

Along the way we stopped and talked with two AMC guys who were putting in some erosion ditches.  Brian was a lead maintenace guy and went around to the various crews providing technical knowledge and oversight. Jim was the caretaker at the Liberty Springs tent site who like other caretakers also cared for the trails nearby. Being a high traffic trail (Liberty Springs is also the AT), and very steep, the trail is constantly eroding and while the majority is passed over the granite/dirt combination so common below treeline in The Whites, there are also some sections of crumbly brown sedimentary rock that easily washes out. As S.D. pointed out - most people think all the trail work, those finely crafted log and stone steps are for the hikers but really they're for the trail. To keep as much dirt and rock on the mountains for as long as possible. 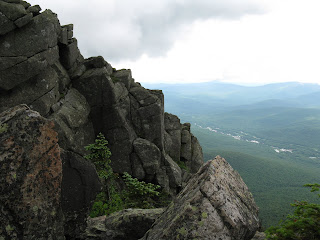 A few hundred yards after chatting with the guys (and catching our breath) we reached the peak of Mt. Flume and soon after were back on Liberty. Our last peaks in Franconia Notch. There were nice views off both and the rain held off until we were half way down. Making a nice hike for us, and the promise of more work for the trail crews.
Posted by Kelly at 7:01 AM No comments: 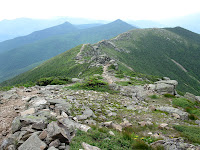 So far in this quest to hike the 48 New Hampshire Mountains above 4000ft I’d managed not to get obsessed, to view the hikes more as a relaxed itinerary than as a means to accomplish a goal. To take each one on its own, and enjoy it.

Standing on the peak of Mt. Lincoln at 5087 ft, and in the middle of the Franconia Ridge trail, one of the most beautiful trails, I caught myself calculating whether or not it would be ‘worth it’ to reverse direction, add a few miles to today’s hike and bag Mts. Flume and Liberty instead of continuing North along the ridge to Mt. Layfette, one of the most amazing hikes in all of New Hampshire. With only 7 peaks to go – my obsessive nature was kicking in – Big Time. 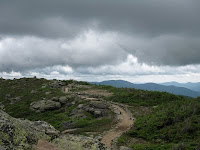 Here I was, on a trail I’d dreamed of hiking since I first saw it four years ago, on a beautiful day, and all I was thinking of was getting off it, and on to the next peak(s). If I could get those other 2 today, that would bring the total remaining to 5. An easily doable number by August and my 50th birthday.

But then a vulture drifted by on the updraft, a small tuft of flowers growing in the small protection offered by a granite boulder, and the look on the face of a passing hiker all brought me back. To where I was.
Posted by Kelly at 8:07 PM 1 comment: