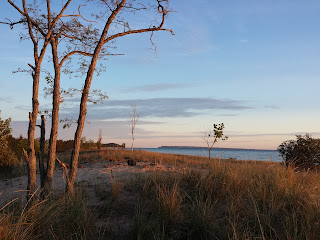 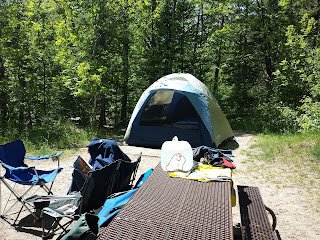 This morning, it's Monday I think, the sunrise over Lake Michigan was beautiful. Our site at the D. H. Day Campground sits on a little wooded rise just South-West of the shore, just a short walk to the beach, and that beautiful sunrise. We'd arrived at 10:00am yesterday and the Ranger tipped us off to this site. Not only was it the best in the campground (#57), but it was opening up in just a few  hours.

Setting up the tent went quickly. Getting things in and out of the van, not so fast. There's just too much stuff to be able to arrange it so everything we need is accessible. After we set up the tent, explored around a little, and had gone to town to pick up food for dinner, we decided to go for a bike ride. Which meant more un-packing and packing of the van.

Sleeping Bear Dunes National Lakeshore is a long, skinny park along the western side of Lake Michigan between the towns of Empire and Glen Arbor, and including the islands of Little Bear and Big Bear. Most of the coastline is composed of sandy beaches and giant sand dunes. And by giant I mean hundreds of feet high. Along with several interpretive stops including a life-saving station and a maritime museum, Sleeping Bear Dunes also has a paved bike path running almost the entire length. During last year's visit we didn't have out bikes and I could only dream of riding that path. This year however, we were ready! And the path, coincidentally ran right by our already perfect campsite.

Once on our bikes we headed South. The path wound along through  oak and pine forests, open fields, bogs. Sometimes providing views through to the Lake, sometimes the Lake was blocked by the giant sand dunes. It was as nice a ride as I'd imagined.

Today, as planned, we're meeting up with Lyss in the morning, but there's a change of plans for the afternoon, and night. We like Sleeping Bear Dunes, and our site so much
we're staying another night. The weather is beautiful, there's more to explore here and we've got the time.
Posted by Kelly at 10:10 PM