Not Knowing: The Little Spearfish Trail

The day following the IDS post (wherein I lamented the lose of data coverage and the resulting inability to know stuff about where we were),  we were physically reminded of the joys of having too little information.

Since we didn't have maps or ideas of where any trails went, we choose to take the trail that went by our campsite in the Black Hills of South Dakota. After 10 days of driving, sometimes a bit, sometimes for nine hours; a day of not driving at all was very appealing.  The trail, where ever it went could be just as good as any other. 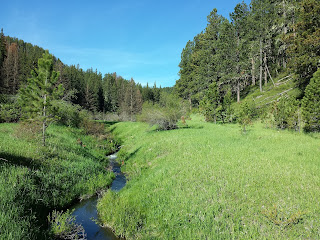 We set off early in the morning, hiking west, and up. Our idea was to hike out two hours, and then, if the trail still went on, just turn around and hike back. It was a beautiful clear morning, and after less than a mile we came to the trail head and discovered that we would be walking on the the Upper Little Spearfish Canyon Trail. Still no idea where it went, except that judging by the name, we figured it went up the Upper Little Spearfish Canyon, which coincidentally was the name of the canyon we were in, and the name of a trail we'd also seen marked further east and down the canyon.

At first the trail followed along what we assumed was Little Spearfish Creek and opened out into a small valley meadow. There were lots of signs of beaver activity. Trees gnawed off at beaver-high levels, little dams, and finally, one lodge. We didn't see any beavers, but we did see lots of wildflowers, birds and even an osprey.

After about another mile the valley widened out, the trail crossed the creek and began winding up 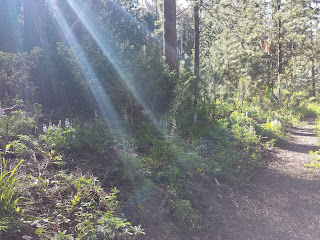 through an open aspen and pine forest with more wildflowers, it also began just slightly turning to the South. It was while walking though this section that we saw a Mule deer, the first of several we saw on this hike.

The trail continued climbing and took another turn so that we were headed due east. I began to suspect that the trail was actually a loop which should return us right back to our tent, but for now we were hiking through an amazing pine forest, the floor covered with yellow daisy-like flowers. I didn't know what they were, but that didn't make them any less beautiful. 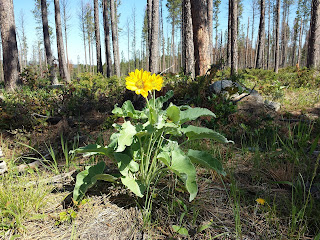 After about two hours we reached what appeared to be the summit as the trail turned north and started heading down. If the loop theory was correct continuing on would take us back to Little Spearfish Canyon, then turn West, up the road.

And so it was that an hour later we were back at the tent having completed a lovely little hike up and around Little Spearfish Canyon. A totally unplanned, unexpected surprise.  There are joys in not knowing, you just have to go with it to find them.
Posted by Kelly at 10:20 AM